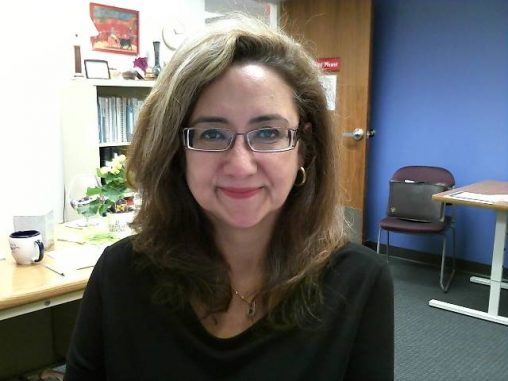 Eréndira López-García, staff psychologist at the School of Professional Psychology, will be honored during the annual Governor’s Distinguished Hispanic Awards Gala in Columbus.

She will be honored by the commission as well as other Latino community leaders at The Ohio State University Office of Diversity and Inclusion on Oct. 14 during the annual Governor’s Distinguished Hispanic Awards Gala in Columbus.

The commission advises state government on issues affecting Hispanic Ohioans, connects diverse Latino communities across the state and builds the capacity of community organizations to better serve the fast-growing Latino population. The honorees are individuals who work steadfastly to ensure that their communities become better places for both Hispanics and the general public.

“It’s an honor, but I haven’t done this all by myself,” said López-García. “Around me are a lot of people who have supported me, people who have worked with me, who believe in my ideas. I’m just a voice of many.”

Since 2007, López-García has traveled the state on a volunteer basis helping Latinas develop leadership skills as part of a community outreach program called Latinas in Ohio: Facing Challenges and Taking Action.

She helps conduct workshops for women who have migrated from the United States from Latin America, empowering them and helping them develop networks to overcome challenges.

Over the years, she has conducted more than 20 workshops in Dayton, Cincinnati, Columbus, Toledo, Lorain and other cities. She has also made presentations on self-esteem, domestic violence and other topics to smaller groups of Latino women.

López-García said many recent Latina immigrants do not speak English, making them feel powerless in their adopted country. The workshops help connect them to Latinas who have been in the country longer and can assist them in learning how to navigate the American system and how to maintain their identities while swimming in a new culture.

The Hispanic community in the region is growing, with a greater influx of immigrants from Central America.

“They are hard-working individuals who come here to work and provide for their families,” said López-García.

She said many face discrimination and cultural barriers and that she has recently seen what appears to be an increase in bullying of young Hispanics. Blogs and other social media are used to support and advise the Hispanic population, but more services — such as interpreters — need to be provided, she said.

López-García grew up in Cuernavaca, a historic, picturesque city in southern Mexico. She moved to Yellow Springs in 1987, earned her Psy.D. degree from the School of Professional Psychology in 2003, joined Wright State’s Office of Disability Services in 2005 as a staff psychologist and then was named staff psychologist at SOPP in July.

She supervises and trains SOPP students in how to do psychological evaluations and diagnosis of patients with attention deficit disorder, autism and other conditions. She also works at the Duke E. Ellis Institute, a 30,000-square-foot facility that houses Wright State’s doctoral program for mental health professionals while serving as a clinic for underserved Dayton-area residents.

In addition, López-García has a flourishing private practice, providing services to the English and Spanish-speaking population suffering from depression, lack of self-esteem and anxiety, especially with people from other countries who encounter difficulty adjusting to the mainstream culture.