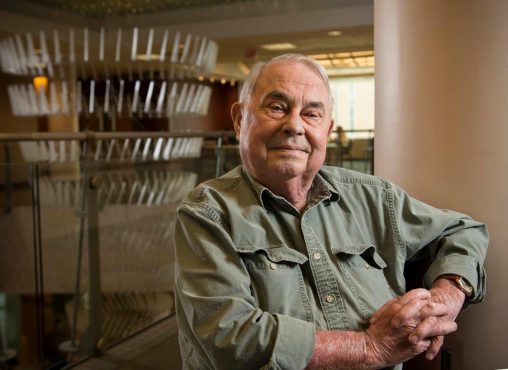 A $15,000 donation raised by a California-based charity that promotes international student exchanges has pushed to $700,000 the total raised for Hungarian college students by a fund established by retired Wright State University professor Béla Bognár and his wife, April.

The donation was presented in September during a benefit gala in Beverly Hills, California, to the Hungarian American Coalition’s Bognár Family Hungarian Scholarship Fund.

It was presented by The Ambassadors of the Future, which fosters student exchanges and encourages young people to participate in philanthropic activities. The group also presented its first Certificate of Recognition to Bognár.

The Bognár fund was established in 1999 to provide assistance to qualified Hungarian university students with excellent academic records and financial need in Hungary, Romania, Ukraine, Slovakia, Serbia and the United States. About $700,000 has been raised for the fund, which has awarded 229 scholarships.

Bognár taught social work at Wright State for nearly 30 years before retiring in 2002. During his career, he raised money for Hungarian students, churches, boarding schools and agencies that help abuse victims.

In a video message thanking The Ambassadors of the Future for his award, Bognár recalled that his grandmother inspired him to establish the scholarship fund with these parting words when he left his native Hungary: “What you do for others gives meaning to your life.”

Bognár lived in Hungary through the Soviet occupation of the 1940s and ’50s, when the Soviets confiscated his family’s 10-acre farm. He was an active participant in the Hungarian Revolution of 1956, a spontaneous nationwide revolt against Soviet-imposed policies.

Bognár was with a group of university students who confiscated arms from an army weapons warehouse and took part in 10 days of bloody, block-to-block street fighting. After the revolution, he left Hungary for Belgium and later emigrated to the United States.

Bognár attended the University of Wisconsin, where he obtained master’s and doctorate degrees in social work, gerontology, health and mental health policies. He taught a generation of professionals who worked in the field of aging and wrote four textbooks and countless articles on health and aging policies.

In 2015, Bognár received the Knight’s Cross of the Order of Merit, one of Hungary’s highest state honors. The award is bestowed upon academics, writers, poets and scientists who contribute the most to advance Hungarian causes.