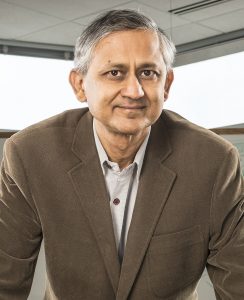 As a young intern with India’s national space agency in the late 1970s, Amit Sheth found himself working on satellite communications with sophisticated computers.

“I got access to computers rather early,” recalled Sheth, LexisNexis Ohio Eminent Scholar and executive director of Wright State University’s Ohio Center of Excellence in Knowledge-Enabled Computing. “I think that and seeing some of the applications to space science and clean energy got me into computer science.”

Today, Sheth is not only a world-renowned computer science expert (he is among the top 100 authors in the world and 68th in the United States based on the most popular metrics of H-index), but he has combined computer science with pulse of the population expressed on social media (what he terms citizen sensing) to create a pioneering technology that promises to change election predictions, disaster relief, advertising, law enforcement, social good and even human health.

Most recently Sheth was honored by the Ohio Faculty Council for his success in commercializing technology. He was named runner-up in the council’s annual Technology Commercialization Award program.

Sheth got the idea of marrying computer science with social media in 2008, when terrorists attacked the sprawling metropolis of Mumbai, India, with shootings in nine distinct places over three days that left more than 160 people dead.

“The stories were breaking on social media as opposed to traditional media,” Sheth said. “So I saw the power, but I also saw the challenge for the common user to social media to consume it very well.” 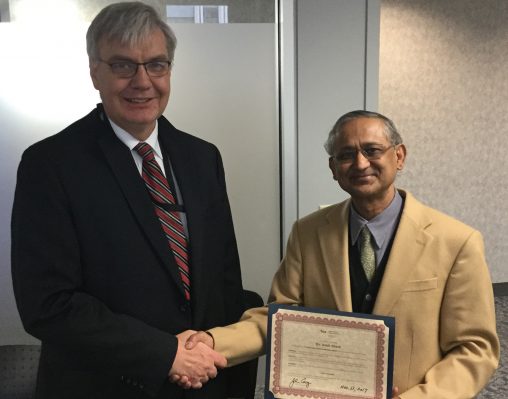 Amit Sheth with John Carey, chancellor of the Ohio Department of Higher Education.

So Sheth and his students began collecting the social media posts, looking for trends and ways to quantify, organize and map the information. That led to the first version of Twitris, a cloud-hosted highly scalable software system that employs a sophisticated algorithm that analyzes social big data such as those on Twitter on a massive scale to provide unprecedented insights, suggestions, actions or predicted outcomes.

Sheth and his collaborators would later use Twitris to predict that Great Britain would vote in favor of the Brexit referendum to leave the European Union before voting was over and that Donald Trump would win the U.S. presidential election hours before polls closed, contrary to predictions of a Clinton win from the major media.

Sheth commercialized Twitris in partnership with Wright State’s tech transfer office, which has exclusively licensed it to Cognovi Labs Inc. While Sheth is not operationally involved in the company, it has hired Wright State students advised by him as employees. Cognovi Labs is the third company Sheth founded using the technology developed during his university research. In addition, he has co-founded and advised startup companies.

“The Twitris technology is just going gangbusters. It’s going everywhere,” he said. It is a key enabler to over $6 million in research projects Sheth currently directs at Kno.e.sis for problems such as marijuana legalization, opioid abuse, identification of depression and harassment on social media.

Sheth grew up in Gujarat, a state in the western part of India. His father was a political science professor who wrote newspaper columns for 56 years as well as 26 books. He also got involved in international development and was an adviser on the Narmada dam project, one of the largest in the world.

Sheth received his undergraduate education at Birla Institute of Technology & Science, Pilani, or BITS Pilani, a top engineering institution. It was while he was there that he had his first brush with large computers when he interned at the Indian Space Research Organisation and other institutions. 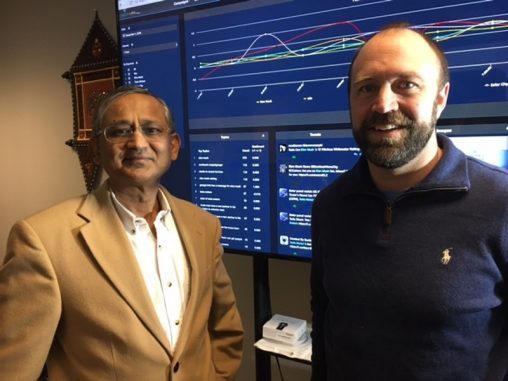 Sheth earned his master’s and Ph.D. in computer science at The Ohio State University. He then went on to work in the private sector, serving in research and development groups at Honeywell, Unisys and Bellcore. He joined the faculty at the University of Georgia in 1994 and Wright State in 2007.

Sheth and his students are working on augmented personalized health, using vital sign data from mobile apps, wearable devices such as Fitbit, medical sensors and social media posts to better manage chronic disease such as asthma, improve GI and heart surgery outcomes, and other health-related conditions. The goal is to improve treatment and enable patients to self-manage their health and seek intervention when necessary.

“For some people, work can be stressful. For me, I get joy from the work and essentially seeing the success of my students,” said Sheth. “They are doing impactful work.”

However, Sheth does find time to relax. He and his wife go for a walk together every evening.