Going for it all 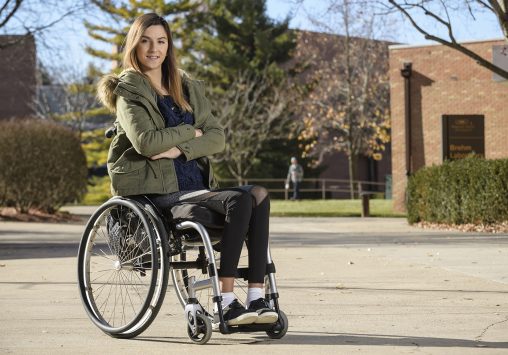 There was a day when she just wanted to give up. Paralyzed from the neck down in a car accident at age 16, Milica Knezevic later was struggling to navigate college in her native Serbia.

Because of limited accessibility to people with disabilities, Knezevic’s friends and family would have to carry her up and down stairs to her classes. And one day, the location of the class changed at the last minute, creating an even greater hardship.

“I couldn’t handle it anymore,” she recalled. “I was just so angry.”

But Knezevic turned that frustration into an inner fire that has propelled her to heights hard to imagine. She has since embarked on a series of rigorous sporting activities, including swimming, surfing, skydiving, parasailing, kayaking, scuba diving and even playing rugby.

“My injury definitely pushed me to do and experience things that I would have never even thought about,” she said. “I just started to look at life differently; just go for everything that I want to do. There are no actual limits for anything. There are really no obstacles.”

Knezevic is currently a foreign exchange student at Wright State University, studying engineering software in the College of Engineering and Computer Science. She plans to return to her native Serbia following fall semester to earn her bachelor’s degree and wants to pursue advance degrees.

She loves the accessibility at Wright State, which is a national leader in accommodating the needs of students with disabilities. Most of the 26 buildings on the Dayton Campus are connected by a unique underground tunnel system, easing travel for students, faculty and staff with physical disabilities.

“I haven’t found a single thing that is not accessible,” said Knezevic. “If you have a wheelchair heaven, this is probably that. It’s perfect.”

Knezevic grew up in a small village in Serbia, a republic located on Europe’s Balkan Peninsula near Hungary, Romania and Bulgaria. She loved to play volleyball and did it competitively.

But when she was 16 and a freshman in high school, she was involved in the car accident and suffered a spinal cord injury that left her paralyzed from the neck down.

“After that, everything changed for me,” she said.

Knezevic spent more than a year in hospitals. She has since regained the use of her upper extremities but uses a wheelchair. She loves her country, her college in Serbia, her classmates and professors, but would like to see more accessibility for people with disabilities.

Knezevic said she had no choice but to overcome her disability.

“When something like this happens, your life turns upside-down,” she said. “You get lost and angry. But then you just see that there is no option for you. I could close myself in four walls and stay in my room forever, but that’s not what I want to do. I was 16 years old. I had so many things in my life I wanted to do.” 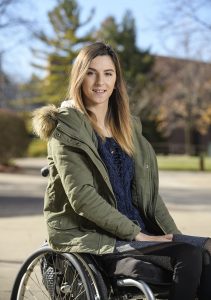 Milica Knezevic loves the accessibility at Wright State, which is a national leader in accommodating the needs of students with disabilities.

Knezevic said she sometimes had to get creative in order to experience all of her new sporting activities. But because she so enjoyed the challenging nature of them, she did not find them difficult.

“I wanted to skydive probably for all of my life. But for some reason it had never happened before,” she said. “That was probably the most exciting experience.”

Knezevic started an online blog as part of a college project and used it to share her experiences.

“This injury could happen to anyone at any time,” she said. “So it was good to have a place where you could go and see that it’s not the end of your life.”

Then Knezevic began to chronicle her sporting adventures with YouTube videos, some of them shot in Serbia and others in the United States. She believes they have had an impact. For example, the scuba diving operation that she used now has a special program for people with disabilities.

Knezevic said her sporting adventures have helped her grow as a person, giving her more strength and confidence.

“It’s nice that I can show people I can do more than they think because most people see me as a weak person. And I’m definitely not,” she said. “But what matters most to me is the way that I see it and the way that I see that I go beyond my limits.”

Knezevic says every single person faces some kind of challenge.

“I just think we shouldn’t give up on our dreams — the things we want to do — no matter how hard it may seem,” she said. “There is no reason to give up on your dreams.”