Air Force veteran Jonathan Granata found a home and the support he needed in Wright State’s Office of Veterans Affairs and the university’s Veteran and Military Center. He’s givien back by providing a gift to support the center's Quiet Study Room 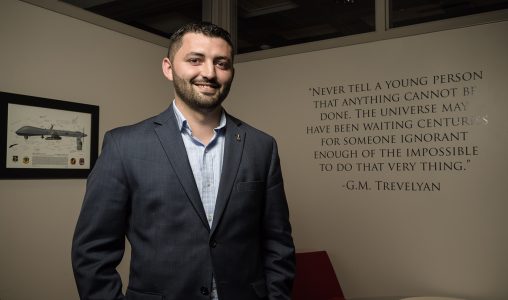 Air Force veteran Jonathan Granata found a home and the support he needed in Wright State’s Office of Veterans Affairs and later the university’s Veteran and Military Center. He’s now giving back by providing a gift to support the Quiet Study Room in the center.

On a wall in the Quiet Study Room inside Wright State University’s Veteran and Military Center is a quote by British historian, academic and author G. M. Trevelyan: “Never tell a young person that anything cannot be done. The universe may have been waiting centuries for someone ignorant enough of the impossible to do that very thing.”

The quote is one of Jonathan Granata’s favorites. When the Air Force veteran and 2015 Wright State graduate provided a gift to support the Quiet Study Room, it seemed only fitting that this quote should grace its walls and inspire student veterans to reach for their dreams.

“You don’t stop serving after you’re done serving in the military,” Granata said. “This is my duty now. It’s my duty to give back.”

With his gift to the Veteran and Military Center, Granata is giving back to the people who helped him when he needed it the most.

“This place saved me in a lot of ways,” Granata said of the Veteran and Military Center.

After serving in the Air Force for five years, Granata sometimes struggled with transitioning from combat zones to the classroom. He was older than most of his classmates and had been out of school for seven years.

But Granata found a home and the support he needed in Wright State’s Office of Veterans Affairs. The university’s Veteran and Military Center was still in the planning stages at that point, but Granata was immediately embraced by the office’s staff.

“It’s a place where people can go and feel safe,” said Granata. “You know everyone in here is a veteran. Most likely, someone in this building has dealt with similar issues. So, you can identify with people.”

“If you haven’t seen the Veteran and Military Center,” Granata added, “come down and check it out. It’s awesome. This should be a model for universities around the country.”

When Granata enlisted in the military, he was continuing the family legacy. Both of his parents served, along with his grandfather and uncle. The military was also an opportunity for Granata to get out and see the world.

Stationed at Dyess Air Force Base in Abilene, Texas, Granata served two deployments in support of Operation Iraqi Freedom and Operation Enduring Freedom. As a loadmaster on the C–130, Granata supervised the onloading and offloading of all cargo and passengers on the military aircraft. He also ran the fuel systems and monitored the plane for any issues during flight. His most important task was overseeing weight and balance on the aircraft, making sure that everything was within the proper limits and that all cargo was tied down correctly.

“It was the first time that I had ever been part of a team,” Granata recalled. “But it’s not just a crew. It’s like the largest amount of trust that you could ever experience. If one of us makes something go wrong or we get shot at, it’s not just me who loses my life, it’s the whole crew.” 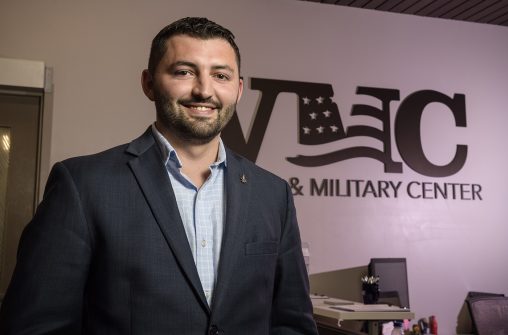 Since graduating from Wright State in 2015, Granata has worked for Student Veterans of America in Washington, D.C., and Accenture as a management consulting analyst.

Fortunately, Granata didn’t experience any close calls during his time in the air. What he remembers and values the most from his Air Force service are the lifelong friendships he made and the amazing camaraderie he experienced with his crew.

“It made me a better person,” he said. “It made me who I am today. I found out how far I could push myself, both mentally and physically. It taught me what it truly means to be responsible. It taught me leadership and how to really be part of a team. That’s helped me get to where I am today.”

By experiencing different cultures abroad, Granata became more globally minded. His appreciation for diversity of thought and the personal life experiences that each individual brings to a team led him to Wright State, where he earned a Bachelor of Science in Organizational Leadership.

Following his graduation from Wright State, Granata worked at Student Veterans of America in Washington, D.C. There, he was inspired by the Jared Lyon, the president and CEO, and the organization’s mission to help veterans to, through and beyond college.

“That really hit home for me,” Granata said. “There’s so much value in veterans in college. They’re bringing leadership experience into the classroom.”

According to the “National Veteran Education Success Tracker: A Report on the Academic Success of Student Veterans Using the Post–9/11 GI Bill,” student veterans are more likely to graduate, have a higher GPA and earn degrees in business, the health professions or the STEM disciplines.

“We are literally turning out our future,” Granata said.

As passionate as he is about higher education for veterans, Granata is also committed to eliminating the misconception that all veterans are either war heroes or broken.

“Ninety-nine percent of us identify in the middle. We’re not broken, but we’re also not war heroes,” he said. “We just did our jobs and wanted to make it home. We’re just trying to reintegrate into society and contribute.”

After earning a master’s degree in organizational leadership and learning from George Washington University in 2017, Granata went to work for Accenture, a global company that provides strategy, consulting, digital, technology and operations services. Granata is a management consulting analyst at the company’s Chicago office.

“It’s just a great culture,” he said. “You have the freedom to experience across industries. They want you to find what you like.”

Along with his family, Granata credits his mentor, Arthur Hansen, commander of the VFW in Huber Heights, and the staff in Wright State’s Veteran and Military Center — Seth Gordon, Ty Lea Gebhard and Amanda Watkins — for his current success.

“Without them,” he said, “this would not be possible.”