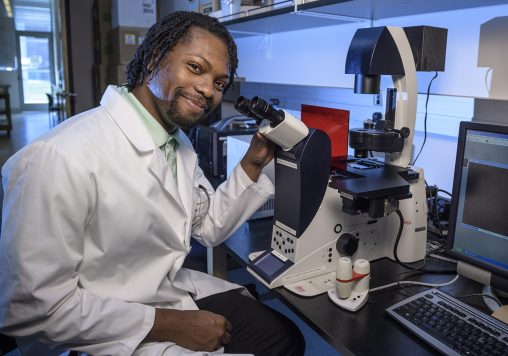 Marquise Crosby, a senior biochemistry and molecular biology major, is co-author of a research paper scheduled for publication in the journal Science. (Photos by Erin Pence)

It’s not the easiest thing to do for an undergraduate student — co-authoring a paper accepted for publication in one of the world’s top academic journals.

But that’s exactly what Marquise Crosby — a senior in the matrix Department of Biochemistry and Molecular Biology in the College of Science and Mathematics and Boonshoft School of Medicine at Wright State University — has done.

Crosby’s research will be part of a paper scheduled for publication in Science, a high-impact, peer-reviewed journal of the American Association for the Advancement of Science.

Crosby feels that publication of the paper is a validation of the importance of the research.

Crosby wants to keep the specifics of the paper under wraps until it is published. He will only say he was directly involved in expressing a protein mentioned in the paper.

The principal investigator in the research and on the paper is Ting Xu, an associate professor in the materials science, engineering and chemistry departments at the University of California-Berkeley. The paper’s other co-authors are Crosby and Patrick B. Dennis, a researcher at the Air Force Research Laboratory at Wright-Patterson Air Force Base who is also an adjunct assistant professor in the Department of Biochemistry and Molecular Biology at Wright State.

Crosby works as a lab assistant at Wright-Patterson in the Soft Matter Branch of the Air Force Research Laboratory’s Materials and Manufacturing Directorate. The directorate develops materials, processes and advanced manufacturing technologies for aircraft, spacecraft, missiles, rockets and ground-based systems and their structural, electronic and optical components.

Crosby spent his early years in Oakland, California, moving to Dayton when he was 9 or 10.

“I always liked chemistry; I always liked sciences,” he said. “I want to say in fifth grade I realized I really liked science. I had great science teachers growing up. And my mother has always been supportive and encouraged me to stay in science.” 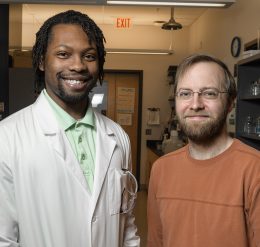 Marquise Crosby and Chad Campbell, instructor in the Department of Biochemistry and Molecular Biology.

With the guidance of his mother, Dedra Porter, Crosby spent his high school years at the Ponitz Career Technology Center studying biotechnology.

“Before I even graduated from high school I knew what a micropippeter was and how to use it,” he said. “My senior project in high school was me trying to extract biofuels from algae. At the time, there weren’t a lot of methods on how to do it.”

Crosby also spent time in the swimming pool, where he swam competitively and specialized in the butterfly stroke.

“It’s the one that came the most natural to me,” he said.

After graduating from Ponitz in 2012, he attended Campbellsville University in Kentucky on a swimming scholarship. But when the rigors of swimming began to affect his studies, he transferred to Sinclair College in Dayton.

“I was just exhausted all the time,” he recalled. “We were swimming at 5 in the morning, in the middle of the day and again at night. The only rest day was Sunday. I felt like I was training to be an Olympian. I liked swimming, but I didn’t love swimming.”

Crosby earned his associate degree in biotechnology at Sinclair and came to Wright State in 2014. He is scheduled to graduate in the fall with a bachelor’s degree in biochemistry and molecular biology.

Crosby would like to go on to graduate school, continue to conduct research and eventually teach.

“I’m actually really interested in marine biology and immunology, which can be two very different things,” he said.