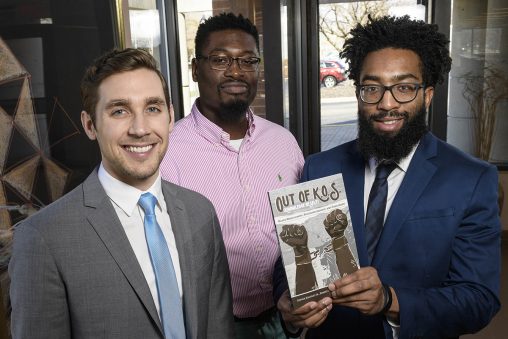 The development of masculinity among black males and its relationship to racial identity and race-related traumas and stress is the focus of a new book written by Wright State University’s Steven Kniffley Jr. and two of his graduate students.

Kniffley, an assistant professor in the School of Professional Psychology, and SOPP students Ernest Brown Jr. and Bryan Davis have produced “Out of K.O.S. (Knowledge of Self): Black Masculinity, Psychopathology and Treatment (Black Studies and Critical Thinking).”

Kniffley says black males are exposed to a great number of mental health issues such as suicide, anxiety and depression, but are one of the most undertreated populations.

He says many black males struggle with a conflicted identity, constantly engaged in a mental tug-of-war between what society says they should be and what their culture says they have the capability to be. In addition, they face racism and discrimination.

The book examines how gender and racial identity, as well as sense of self, creates black masculinity, how these factors affect mental health issues and how to use them to create an effective psychotherapy.

“One of the things we’re attempting to do is to show black males how to empower themselves and other black males by developing a positive, culturally consistent narrative of their experience,” said Kniffley. “The book is about what we can do to be better aware of how mental health issues develop for black males as well as some of the nuances that need to be considered when treating those issues.”

To write the book, the researchers reviewed studies and other literature, conducted qualitative research and tapped into their own knowledge and experience.

Davis’ research looked at how males are taught to be men by family, peers, society and the media. He examined the social structures of gender development and the strain that comes with it.

“Socialization teaches a very rigid and inflexible way of being masculine,” he said. “And then layering it on top, what does this look like in different cultures, specifically within black males?” 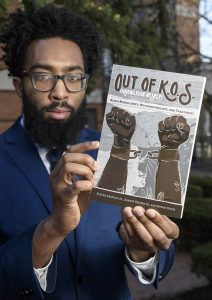 Steven Kniffley says SOPP is a leader in training students in diversity and how to work in diverse areas.

Brown’s research looked into how black males construct the way they see themselves. Masculinity-forming messages from family and friends can be positive and empowering, but society may be giving them different messages. That can set them up for mental health issues.

“We want this book in the hands of everyone,” said Brown. “It’s not just for therapists or academics.”

“It becomes very tricky from a therapist’s standpoint,” he said. “If you’re not educated in diversity variables, you’re missing a whole subsection in the development of masculinity in some of the performance and behaviors. There are layers of the process that we need to be aware of to understand black men.”

The final chapter of the book outlines a model of therapy that is cooperative and collaborative.

“You need to do those things that tell the black male you are there to work with him, not to impose some sort of theoretical orientation on him,” said Kniffley. “We focus on developing narratives so black males begin to think of themselves differently and are able to address issues of discrimination appropriately and develop the skills necessary to resolve the conflict themselves after the therapeutic process has ended.”

He joined the faculty at Wright State in 2014 and while at the university earned a second master’s degree, in public administration.

Kniffley said the School of Professional Psychology has always been a leader in training students in diversity and how to work in diverse areas.

“The students have to be equipped to deal with the cultural issues that might come up, and SOPP does a fantastic job of preparing them,” he said.