Music of the night 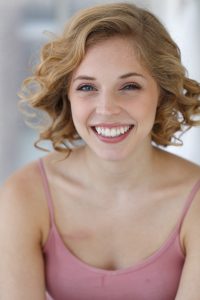 Kate Mueller, a 2015 Wright State acting and musical theatre graduate, is performing in the North American tour of “The Phantom of the Opera.”

When the longest-running musical in the history of Broadway opens at the Benjamin and Marian Schuster Performing Arts Center this week, a familiar face will grace the stage.

Kate Mueller, a 2015 graduate of Wright State University’s acting and musical theatre program, performs in the iconic musical’s Corps de Ballet and serves as one of two understudies for the role of Meg Giry.

For Mueller, a native of Bellbrook and Alter High School graduate, being part of the “Phantom” ensemble is a dream come true.

“I feel so grateful,” she said. “This job is what I have been working for my whole life.”

Landing a role in the touring company was no easy feat. At home in New York, Mueller was invited to audition for the role of Meg Giry in August 2016. While she was one of the top candidates, she did not get the part. More than a year later, in September 2017, Mueller was called back to audition once again. Two days later, she was asked to join the tour to fill in for a performer who is currently out on medical leave.

As one of six dancers in the Corps de Ballet, Mueller gets a fair amount of time on stage.

Performing on tour has proven to be an invaluable learning experience for Mueller.

“It taught me all of the ins and outs of how a professional equity show should run,” she said. “It made me more confident as a performer.”

Mueller is also thankful for all of the life skills she has picked up along the road.

“Traveling every two weeks can be really difficult,” she said, “and it taught me all of these travel skills, from how to find a hairdresser in a new city to how to book flights and find the best deals on car rentals.”

But for Mueller, the most challenging aspect of visiting a different city every two weeks is being away from her support network. Fortunately, the cast and crew of “Phantom” have helped fill that void.

“I love them,” said Mueller, “and they’re very much my support network and family.”

Mueller’s Dayton family and friends won’t have to travel far to see her perform on the Schuster Center stage.

“To be on the stage that I grew up with, it’s incredible,” said Mueller.

Mueller’s dream of performing began as a young girl watching her two older sisters take dance classes. As soon as Mueller started her own dance lessons, she was hooked. 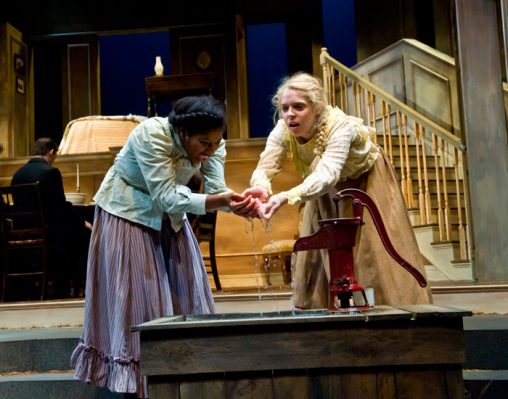 As an acting and musical theatre student, Kate Mueller starred as Helen Keller in Wright State’s production of “The Miracle Worker.”

At the age of 10, she realized she wanted a career in the performing arts.

“It was a really good fit for me,” said Mueller. “All of the professors were instrumental to my training and to who I am as a person. They really make sure you are well rounded, that you stretch yourself in a lot of different areas. They also didn’t neglect the business aspect of it. They made sure I had a website and a resume.”

Some of Mueller’s favorite memories from her time at Wright State include performing at the annual ArtsGala and taking on the lead female roles of Helen Keller in “The Miracle Worker” and Laurey in “Oklahoma.”

While Wright State gave Mueller the invaluable opportunity to hone her craft, she is also grateful for the scholarships she received as a student that allowed her to graduate debt free.

“It’s such a gift,” said Mueller. “For some people, scholarships may be the only thing that gets them to and through college. When you’re in school, you really don’t have that much time to work if you’re trying to dedicate yourself to studying. It’s so necessary for people to have those scholarships.”

When Mueller’s contract with the “Phantom” tour ends in early May, she hopes to spend some time in Dayton with her newborn nephew. Then it’s back to New York to audition and find the next job.

“I just want to stay in the arts,” said Mueller, who is open to any opportunities that may come her way in theatre, television or film.

If there’s anything Mueller has learned during her journey so far, it’s the importance of grit and determination.

“Be your own cheerleader and fight for yourself, whether it’s acting or you want to be a CEO,” she said. “Perseverance is the name of the game.”

“The Phantom of the Opera” runs from April 11 to 22 at the Benjamin and Marian Schuster Performing Arts Center. Tickets are available at ticketcenterstage.com.