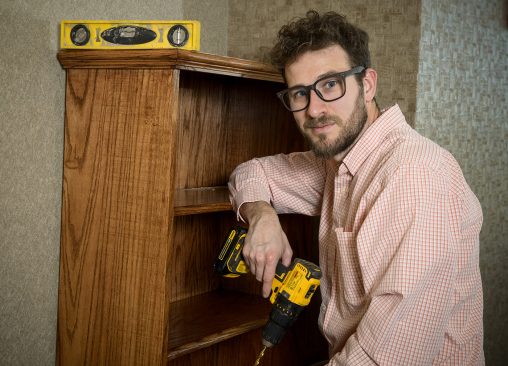 Wright State alumni Ryan and Amber Ireland helped create the Little Free Library on the fourth floor of Millett Hall, where anyone can take a book to read or leave one for someone else to find. (Photo by Chris Snyder)

Wright State University is the latest site of a Little Free Library installed by the Third Story Literacy Project, an ambitious initiative designed to inspire a love of reading, create informed readers and build community.

The hand-crafted, three-shelf, oak library was installed in the lobby area of the fourth floor of Millett Hall on April 20. The library is sponsored by Alpha Upsilon Tau, the Wright State chapter of the international English honor society Sigma Tau Delta.

“Students, faculty and staff who come up to the fourth floor of Millett can browse the Little Free Library and take a book,” said Crystal Lake, associate professor of English language and literatures and faculty adviser for Alpha Upsilon Tau. “The Little Free Library reflects the mission of Wright State to provide an education and access to knowledge for the whole community.”

Anyone passing by a Little Free Library can take a book to read or leave one for someone else to find. The library at Wright State, designed to hold 20 to 50 books at a time, will be stocked and maintained by Alpha Upsilon Tau as part of a service project.

“The Little Free Little Libraries are great conversation starters,” said Lake. “And one of the traditions that organically arises from these libraries is that people leave their favorite books — books that really mean something to them — for others to read and love, too.”

The Third Story Literacy Project was created about a year ago by Wright State alumni Amber and Ryan Ireland.

Ryan Ireland is a successful novelist who has had two novels published — “Beyond the Horizon” and “Ghosts of the Desert.” He earned his bachelor’s degree in creative writing and poetry and his master’s in composition rhetoric from Wright State, and his Ph.D. in rhetoric composition from Miami University. He works for the Greene County Public Library in community relations.

Ireland first got involved in the Little Free Library project by volunteering to raise awareness of the accessibility of Little Free Libraries in Cleveland by bicycling a total of 30 miles from one to the other and stocking them with books.

According to the U.S. Department of Education, three of every five low-income families have no books at home for their children.

“The effects of early literacy are always foremost in my mind,” said Ireland. “I want these books going into people’s homes. Books shouldn’t just be for people who can afford them.”

The name of the Irelands’ project, “Third Story,” was inspired by the fact that their office is on the third story of their home and also to reflect that the books in the libraries are designed to get more than one use.

About a dozen Third Story libraries have already been installed in the area, with plans for at least 20 more in the immediate future. They have been installed outside churches, a restaurant, a general store, a social services agency, a food pantry and even in a community park. One library, built by a professional woodworker, sits next to a church and has a steeple and a bell. 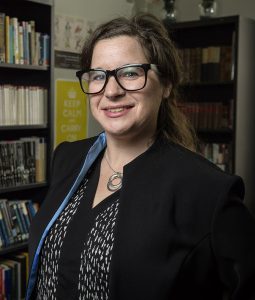 Crystal Lake is faculty adviser for Alpha Upsilon Tau, which sponsors the library.

Ireland built, varnished and installed the Little Free Library at Wright State himself.

“Any chance I have to give back to Wright State I will, especially when I see it directly serving the students and enhancing their time here at Wright State,” he said.

Many of the books donated to seed the library will come from faculty.

“The Little Free Library in the Department of English at Wright State will be a really rich source of books,” said Lake, who earned her Ph.D. in English literature at the University of Missouri and specializes in British literature written between 1650 and 1850. “Experts in English and their students will wander over to the library and leave their books. The collection of books promises to be both great and also interesting. We’re looking forward to seeing how our books mingle with the books that others leave, too.”

Ireland hopes the library will fill up with books not only from the English department, but also from other departments across campus. Ideally there will be stimulating books on topics such as philosophy and environmental science as well as popular novels, he said.

“This is not just the English department’s Little Free Library,” he said. “It’s Wright State’s.”

Alpha Epsilon Tau will host a regular Friday Afternoon Club beginning fall semester to discuss recently published fiction and nonfiction books, chapters or sections that the members have read. Meetings will be held at 3:30 p.m. on the fourth floor of Millett Hall and will be open to the entire campus community. You can keep up with them on Twitter and Facebook @wrightreaders.