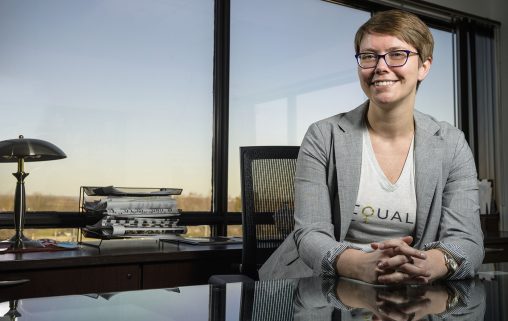 Activism came early to Eleanor Tripp, a student in Wright State University’s School of Professional Psychology and a co-founder of Dayton Indivisible for All, which fights intolerance, racism and authoritarianism.

When she was growing up in the village of Siren, Wisconsin, Tripp would help her mother wage tobacco-cessation campaigns. Tripp and another teenage friend produced and starred in movie trailers designed to expose the dangerous products in cigarettes and show how cigarette advertising focused on young people.

She and her friend would go into gas station convenience stores and surreptitiously film the flashy cigarette signs and ads designed to catch the eye of young people with placement next to candy and ice cream. The trailers were shown at the town’s movie theater.

“I guess it was like mini baby activism back then,” said Tripp.

Tripp is sitting in her forensic psychology class at Wright State discussing with fellow students the criminal justice system, legislation that would impact them as psychologists and their disappointment in the outcome of the presidential election. The discussion leads to a decision by the students to start a chapter of the Indivisible movement, which teaches its members how to effect political change by becoming peaceful but creative activists at the local level.

The students created a Facebook page, designed a logo, came up with a name and within the first week had hundreds of members. The group currently holds monthly meetings at a local church. The meetings have included presentations by local advocacy groups and generally feature a discussion of issues and legislative processes. Members have planned and taken part in a local women’s march, a health care rally and made office visits to lawmakers.

Tripp was valedictorian in her graduating class at Siren High School in 2003. She went to New York City to attend Barnard College, a prestigious women’s school.

“I wanted to get out and see the world a bit more,” she said. “At the time I didn’t recognize that it was a really big deal. But it felt like a really great opportunity.”

Tripp majored in anthropology and took many classes across the street at Columbia University.

“I’ve just always been interested in people and how they work,” she said. “I actually ended up focusing on mental health and culture.”

While she was at Barnard, Tripp enrolled in a Sea Education Association program, spending six weeks in Woods Hole, Massachusetts, studying oceanography, nautical science and maritime studies. She then spent six weeks on a tall ship in the Atlantic Ocean and Caribbean Sea learning how to sail and doing scientific research.

In 2005, Tripp had a close brush with Hurricane Wilma, the most intense tropical cyclone ever recorded in the Atlantic basin, with Category 5 winds of 185 miles an hour. Wilma would leave at least 62 people dead after making landfall in Mexico, Cuba and Florida.

Although Tripp’s brigantine sailboat wasn’t directly hit by Wilma, the boat and its 31-person crew experienced seas with swells of up to 30 feet.

“It was essentially my first time sailing,” she said. “You could hear the pots and pans crashing back and forth all night long. I’m just laying there thinking, ‘Does the captain know we’re going to die?’ I remember having to wedge my legs in between the walls of my bunk to just hold myself in place. I was pretty scared.”

After earning her bachelor’s degree in anthropology in 2007, Tripp spent some time working on schooners and then over the next few years held a series of jobs. She volunteered in a program for adults with severe mental illnesses and worked in New York City at a homeless shelter for teens and at a sober-living facility.

In 2011, Tripp realized that psychology was her calling and began looking at graduate schools.

“I really wanted to gain as much knowledge as possible about psychopathology, assessment and treatment, but I have also really enjoyed learning about the impact psychologists can have as advocates and allies for social justice,” she said.

Tripp, who is now a third-year student, said SOPP has challenged her to grow and helped her think about biases she never thought she had.

“I want to be able to treat anybody who comes into my office down the line,” she said.

Tripp works at South Community, a private not-for-profit corporation providing mental health, substance use and integrated care. After graduation, she may enter the National Health Service Corps, which places health professionals in high-need areas. Eventually she wants to work in private practice as well as community mental health.