Along for the ride

Collectively, they have rescued a turtle, seen a heron catch and swallow a fish, survived a crash into a road sign and discovered neighborhoods they never knew existed. These are among the adventures of Wright State University employees who bicycle to and from work.

Seth Gordon, director of Wright State’s Veteran and Military Center, has biked to work sporadically from his home in Yellow Springs for the past two to three years. The 22-mile round trip takes him about an hour-and-a-half.

“This really gives you a chance to process through your day, let your day go, get the exercise I need,” said Gordon.

Angela Griffith, assistant dean for academic affairs for the College of Engineering and Computer Science, has biked to Wright State from her home in the east part of Dayton for about 11 years. Eric Corbitt, director of Student Union Activities and Recreation, has begun biking from his home in Beavercreek.

But neither can top Carl Brun, assistant vice president for university curricular programs. He’s biked to Wright State for the past 17 years. 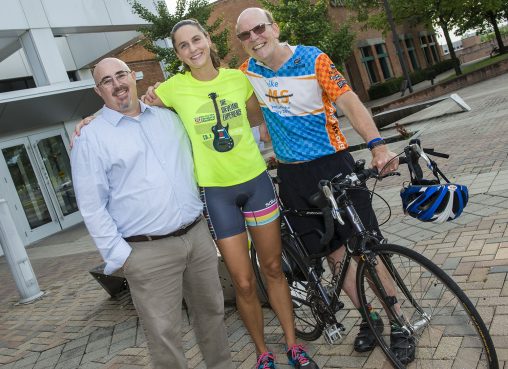 From left: Eric Corbitt, Angela Griffith and Carl Brun are among the Wright State employees who regularly bicycle to work for the exercise, to relieve stress and help the environment. (Video by Kris Sproles / photo by Chris Snyder)

The 58-year-old Brun bicycles to work about three times a week from his home in North Dayton, a little over 12 miles each way. Most of the trip is on a bike path and takes twice the time it would take if he was driving, about 50 minutes each way.

“I’m right along the river so I see herons, I see deer, I see turtles, a lot of wildlife,” he said. “I actually saw a heron swallow a whole fish. I saw another bird carrying a fish.”

Brun used to be a distance runner, but he turned to biking when his hip began to hurt.

Gordon, 47, also used to be a runner but had to stop after suffering shin splints. He has since become an evangelist for biking.

“(Late actor) Robin Williams described it as the closest thing to flying on the ground. I don’t know if I agree with that, but it’s great,” said Gordon. “You’re out in the corn. You’re out on the road. I can go out and exercise for three or four hours at a time and still feel OK.”

Gordon loves to ride in a light rain, calling it “delightful.”

“It’s like you’re exercising and somebody is spraying you with mist,” said Gordon, who recently completed a one-day, 160-mile bike ride across Indiana. “It was overcast and rainy the whole day. It was awesome.”

When Gordon arrives at work, he showers, shaves and dresses for his job.

“If I bike, I’m adding at least two hours to my day,” he said. “But it’s mostly spent on my health. So that’s kind of worth it.”

Griffith typically bikes to her job at Wright State one day a week — a 20-mile, 80-minute round trip.

“I’ve biked since I was a young kid,” she said. “I’ve always been active. I like working out.”

Griffith bikes for the exercise and to save a little money on gas. She says her commute is very bicycle friendly, with only the occasional inconsiderate driver.

“I think it’s something a lot of people should consider if they have the accessibility to campus,” she said.

Corbitt has just been biking to Wright State since May. It’s a 12-mile, 70-minute round trip. He said he has discovered neighborhoods he never knew existed even though he’s lived in Beavercreek for 20 years. And he once rescued a turtle that had crawled onto a busy highway.

“I needed to exercise more,” he said. “I wanted to find something that I enjoy, and biking has been that. It makes me feel better when I get to work. You get out in the fresh air, and most days the weather is really nice. We’ve got a beautiful area here between Beavercreek and Fairborn and campus.”

Corbitt, an advocate for biking, said the Dayton area has nearly 350 miles of connected paved trails, the largest network in the country.

He says if more people would bike to campus it would relieve some of the stress on parking, make people healthier and help the environment. He says a proposal is in the works for a bike-share program that would enable students to better navigate the campus and the residential areas surrounding it.

“We do have racks located in a lot of good places on campus,” he said. “We could use some more. We could use some bike fix-it stations. There are some places where it’s really challenging to ride, although it’s improved in the last few years.”

Corbitt, Brun and Gordon have had their share of adventures while biking.

Brun has biked through severe thunderstorms and once crashed into a road sign, an accident that required 17 stitches in his upper arm. He also was once biking behind a car when a large tree branch fell onto its roof. He stopped to see if the driver and the young child she was transporting were OK. They were. 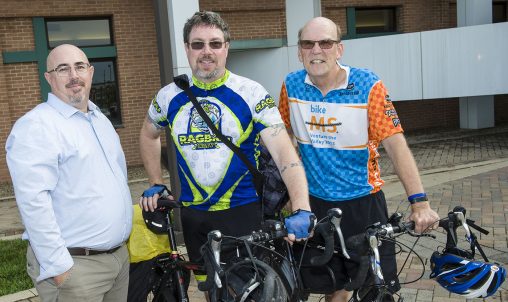 A proposal is in the works for a bike-share program that would enable students to better navigate the campus and the residential areas surrounding it.

Gordon once biked from Columbus to Yellow Springs and decided to veer off the main highway and try to find his way home on farm roads. He had biked for about 25 miles when he encountered a collie.

“This dog was angry,” Gordon recalled. “I pedaled as long as I could. … You got maybe 60 seconds in the tank and you’re toast. He (the dog) gave up and I made it, but it was painful.”

The Wright State bicyclists all agree that preparing for the trips — dressing, collecting gear, applying sunscreen — can be pretty time-consuming.

“The joke is that people like me are called MAMILs — Middle-Aged Men In Lycra. There is a lot of gear,” said Gordon.

But he said he feels lucky as a bicyclist to be working at Wright State.

“The facilities here are just what I need,” he said. “I actually have a locker in reserve.”

Brun keeps pairs of dress pants, shirts and shoes in his locker to wear after he arrives at work.

“The biggest thing is remembering sometimes what I brought or what I didn’t bring,” he said. “I had to go to Meijer one time to buy a shirt.”