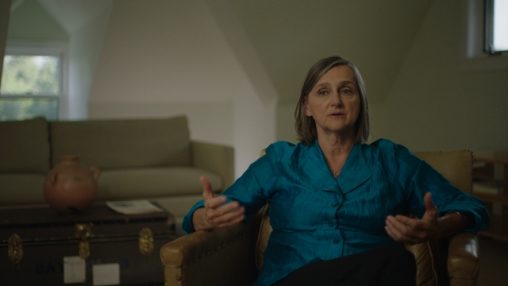 Cheryl Meyer, associate dean of the School of Professional Psychology, was interviewed as an expert in forensic psychology for “The Last Defense.” (Photo courtesy of ABC-TV)

Meyer, a professor and associate dean of the School of Professional Psychology, was interviewed as an expert in forensic psychology for “The Last Defense,” a seven-part documentary series that focuses on two death row cases. The series explores and exposes flaws in the American justice system, according to the network.

Meyer was contacted by the producers of “The Last Defense” and asked to provide her expertise on camera. She was flown to Minnesota for the taping in August and spent two days there.

She appeared in an episode featuring Darlie Routier, 48, of Rowlett, Texas, who was convicted of murdering her 5-year-old son Damon in 1996. She was never charged with the murder of her other son, 6-year-old Devon. Both boys were stabbed to death with a large kitchen knife. Routier received the death penalty and has been on death row in Texas for more than 20 years.

Routier told police her home had been broken into and that an intruder had stabbed her children and slashed her throat. Defense attorneys said there was no reason why Routier would have killed her children and that the case did not have a motive, a confession or any witnesses. The chief medical officer testified that the wound to Routier’s neck came within two millimeters of her carotid artery and that it was not consistent with self-inflicted wounds he had seen in the past.

Routier was portrayed by the prosecution as an unhappy woman in a depressed state of mind. One of the people interviewed said Routier was dealing with postpartum depression following the birth of her youngest son eight months earlier. This son was not injured in the attack.

During the trial, prosecutors submitted Routier’s journal they say suggested she might have been thinking of taking her own life.

In a journal entry addressed to her three sons, Routier wrote: “I hope you will forgive me for what I’m about to do. My life has been such a hard fight for a long time and I can’t find the strength to keep fighting anymore.”

In her appearance on the show, Meyer suggested the prosecutor took the excerpt out of context.

“In fact, she has another entry in the journal talking about how much she loves her children and how much she wants to see them grow up,” said Meyer. “And she wants them to be fine citizens contributing to society. So I don’t see in there anything about harming the children or taking them out of the future equation.”

Prosecutors also played a newscast during the trial of Routier having a birthday party at her children’s gravesite eight days following their deaths. The party featured balloons and Silly String.

The newscast raised questions among some about the depth of Routier’s grief.

Meyer reframed this and explained how context influences our judgment in these cases.

“What if the child had died of cancer and she went and was doing the Silly String?” said Meyer. “We would all think what a courageous woman she was.”

Meyer has written two books on mothers who kill their children, or filicide, and recently published a book on suicide. For the book “When Mothers Kill,” she interviewed over 40 women who were incarcerated for killing their children.

Although these women are often treated as pariahs, Meyer found that in general they were not “monsters” but rather women who were experiencing difficult circumstances that were exacerbated by mental illness or a lack of social support.

Meyer acknowledges that researching such dark topics can take an emotional toll but says she is very good at compartmentalizing. She routinely receives letters from mothers who are convicted of killing their children, families trying to understand why their loved one committed this act or even children who survived an attack. She hopes her research on patterns related to mothers who kill their children aids in the prevention of such tragedies.

Meyer obtained her Ph.D. in social psychology from Miami University and her law degree from DePaul University. She joined the faculty of the School of Professional Psychology in 1997 and specializes in forensic psychology, family violence, correctional psychology and politics and reproductive rights of women.

Meyer has previously been on “60 Minutes” and “The John Walsh Show.” She has also been quoted in most major national newspapers including The New York Times, Chicago Tribune, The Washington Post and The Boston Globe.