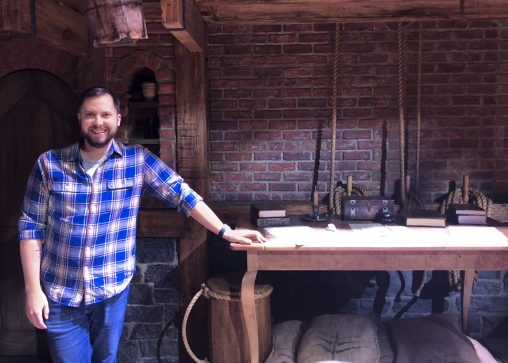 Cameron Holsinger, who graduated from Wright State Theatre Program in 2004, is the first assistant stage manager for “Hamilton” on Broadway.

When it comes to staging a Broadway play, Wright State University alumnus Cameron Holsinger can tell you a thing or two. He is the first assistant stage manager for the high-octane, spectacularly successful “Hamilton: An American Musical.”

Holsinger started out as the production stage manager when the Chicago company of “Hamilton” began in 2016. He later became and is currently the first assistant stage manager for “Hamilton” on Broadway in New York City.

And Holsinger isn’t the only one with Wright State connections to “Hamilton.”

King David Jones, who studied in the Musical Theatre Program at Wright State for two years, is a “swing” for several characters in the traveling production of “Hamilton,” including Thomas Jefferson, James Madison and Marquis De Lafayette. The term “swing” refers to a member of the company who understudies several chorus or dancing roles.

“Beside the fact that it’s just brilliant, it has ignited a renewed interest in theater for a lot of people who were bored by the predictable, typical show,” said Holsinger. “It has also, more importantly, provided a gateway for those who would never have come into contact with a musical otherwise.”

“Hamilton” has achieved both critical acclaim and box office success. In 2016, it received a record-setting 16 Tony nominations, winning 11, including Best Musical, and was also the recipient of the 2016 Grammy Award for Best Musical Theater Album and the 2016 Pulitzer Prize for Drama.

Jones said “Hamilton” is special because the musical is beautifully told through many theatrical elements at once.

“The lighting, the music, the choreography is freakishly thought out so well to help aid in the storytelling,” he said.

The “Hamilton” companies participate in EduHam, a program that works with high school students studying the American Revolution. The musical is part of it, but the students also study everything else from that historical period. There is also a student performance aspect to the curriculum.

“We get to see a few of these performances — spoken word, rapping, songs, skits — by the students at the theater, and they’re truly inspiring,” said Holsinger. “It gives you hope for the future.” 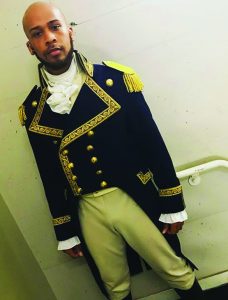 King David Jones, who studied in Wright State’s Musical Theatre Program, is a “swing” for several characters in the traveling production of the hit musical.

During rehearsals, stage managers are the main communication link between all departments. They make sure all the information from the rehearsal room gets to the designers and others and then makes its way back to the rehearsal room. They take more of a hands-on role once the show moves into the theater.

“We ‘call’ the show. So every time you see the lights change or scenery moving, a stage manager is cueing that to happen,” said Holsinger. “The other stage managers are backstage making sure everyone is safe and that things are running smoothly in the wings. It’s very much a team effort.”

After the show opens, stage managers are responsible for maintaining the show artistically.

“That means running brush-up rehearsals, putting new cast members into the show and giving notes to the cast that is doing the show nightly,” he said.

“Hamilton” runs eight times a week and twice on Wednesdays and Saturdays. There are also rehearsals during the day on single-show days and sometimes during shows at an offsite rehearsal hall.

Holsinger grew up in Mt. Gilead, Ohio, where his parents own and operate the town’s small, single-screen movie theater.

He was bitten by the musical bug as a boy when his mother would watch old movie musicals and he performed in shows at school and in the community from middle through high school.

Holsinger enrolled at Wright State on a full-ride academic scholarship, not intending to pursue acting as a career.

“I just lucked out that Wright State had a fantastic theatre department,” he said. “I knew I wanted to be involved with theater. But not wanting to be an actor anymore, I wasn’t completely sure where that left me.”

Holsinger’s mother encouraged him to pursue being a stage manager, so he became a theatre major with a concentration in stage management. He said Wright State’s Theatre Design and Technology Program is comprehensive and extremely hands-on.

“Not having a graduate program meant that as an undergrad you really get thrown into it from day one, and you sink or swim,” he said. “There’s also enough theater happening outside of the school productions — student-run shows, local theater in Dayton — that you can really get as much extra experience in as you want, which is immensely helpful when you transition into life after graduation.”

During his junior year, Holsinger interned at The Goodman Theatre in Chicago and then landed a summer job at Chicago Shakespeare Theater as an assistant stage manager.

After graduating from Wright State in 2004, Holsinger was hired as a production assistant for the Chicago production of “Wicked” and then worked on the “Wicked” tour, making his entrance into commercial theater. He later moved to New York City.

Jones grew up in Mableton near Atlanta and got involved in theater at the Cobb County Center for Excellence in the Performing Arts. His love for theater was cemented when he was cast as a dancer in the musical “Hairspray.”

After graduating from Pebblebrook High School in 2013, he enrolled at Wright State as an acting major with a musical theatre emphasis, attracted by “the amazing work being done in the Creative Arts Center.”

“I knew attending Wright State’s Acting Program would supply me with the tools to become the best actor I can be, and it did just that,” he said. “The amount of time we spent working on ourselves and accepting that we are enough as actors and humans was life-changing for me during my time there.”

Jones left Wright State after his sophomore year after booking a performance gig on Carnival Cruise Lines. Two years later he was performing in the national tour of “Motown: The Musical.”

Holsinger said he would be happy to be with “Hamilton” for a long while.

“It’s such a rarity in our business to work on a show that has longevity that you can also stand by on an artistic level,” he said. “I’m about two years in now and I’m not tired of the show yet. I think that speaks volumes about the piece itself and the people that I’m working with and for. I’m not ready to move on from this quite yet.”