About 100 Air Force ROTC cadets from Wright State University partnered with Rebuilding Together Dayton to clean up a Dayton neighborhood.

A Dayton neighborhood got a major makeover thanks to about 100 Air Force ROTC cadets from Wright State University.

The cadets spent four hours on Sept. 22 clearing brush, picking up debris and even applying a coat of primer to a house.

“Every cadet worked hard without complaint and truly showed service above self by giving up a Saturday morning to help those in need,” Amy Radachi, president and CEO of Rebuilding Together Dayton wrote in an email to Wright State President Cheryl B. Schrader and Dayton Mayor Nan Whaley.

The relationship with Rebuilding Together Dayton began last year when Wright State Air Force ROTC cadets volunteered for a similar effort. This year, cadets were required to participate because the initiative met training objectives such as team- and morale-building and was seen as a good way to serve the community.

Stoffa said the group cleaned up alleyways, picked up broken glass and other debris and pulled “lots and lots and lots of brush.”

“There was an abandoned lot you could hardly see,” she said. “We cleaned it up and set everything out along the roads for pickup. There were piles everywhere.”

The cadets also put a coat of primer on a house that will be part of National Rebuilding Day in April and removed a partially collapsed garage because the 77-year-old homeowner had nowhere else to turn. The students, who filled a 40-yard-long dumpster to the brim with the debris, were thanked repeatedly for their efforts by grateful residents.

“We have good people, good students — students that know how to make a difference in the world and improve everything they are involved in,” said Stoffa. 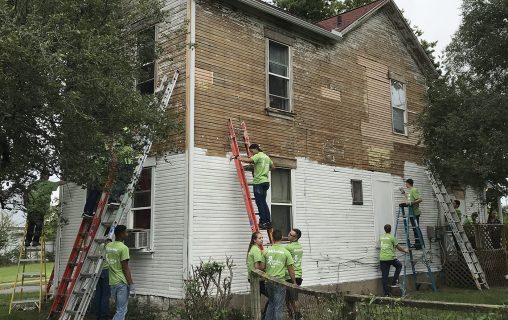 The cadets cleared brush, picked up debris and applied a coat of primer to a house that will be rehabbed.

She said the experience also enabled the cadets to do a little bonding.

“They were able to talk to each other and build their relationships, get a shared experience — the things you don’t necessarily have time to talk about in class,” she said.

“It’s a great community to be part of,” she said. “And it’s a good chance to serve others and make a difference in the world.”