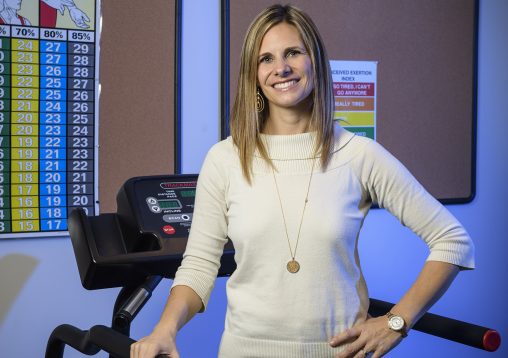 She suspected it all along, but it really became convincing when she was doing research for her Ph.D. in exercise physiology — that people with cancer should exercise.

Exercise not only strengthens the body but is also a tonic that helps with fatigue, depression and anxiety — conditions that often go hand-in-hand with cancer and cancer treatment, says Karen Wonders, director of the Wright State University Sports Science Program and founder of the Maple Tree Cancer Alliance.

Founded in 2010, Maple Tree Alliance is a nonprofit that provides free exercise, nutritional guidance and fellowship to people battling cancer. From a small office in downtown Dayton that served about 50 patients a year, it has spread to eight hospitals and is on the verge of having a total of 20 centers in Ohio and Pennsylvania.

“My vision for Maple Tree is it would be a national organization,” said Wonders.

An evangelist for exercise, Wonders has been doing it almost daily since she was 5 years old growing up in Pittsburgh. At Seneca Valley High School, she was active in sports and would even create exercise programs for people.

After graduating in 1996, she enrolled at Slippery Rock University in western Pennsylvania with the intention of going on to graduate school in physical therapy. But along the way she discovered exercise science, which can lead to careers in personal fitness, athletic training, coaching, sports nutrition, sports medicine and other fields.

“In my heart I knew that that was what I was supposed to do,” she said. “I just thought it was so fascinating to think of how perfectly our body systems work together and how perfectly they’re designed and how exercise makes everything better. Things change inside the body when you begin to exercise.”

After earning her bachelor’s and master’s degrees in exercise science from Slippery Rock, Wonders was accepted at the University of Northern Colorado to pursue her doctorate in exercise physiology under the condition that she also conduct cancer research.

“My research solidified my belief that everyone who has cancer should exercise,” she said.

After earning her Ph.D. in 2006, she joined the faculty at Wright State as an assistant professor of exercise science in the College of Education and Human Services. She is now a full professor.

In 2010, Wonders started Wright State’s Sports Science Program, which offers a bachelor’s degree that can be a springboard to jobs as a physical trainer or at health clubs, clinics or in work-site wellness programs. Many students go on to get advanced degrees in exercise physiology, physical therapy or occupational therapy.

It was at Wright State where the seeds for Maple Tree sprouted.

Wonders says there are 15.5 million cancer survivors in the United States, but fewer than 5 percent exercise during treatment.

“I couldn’t get that out of my head,” she recalled thinking. “Why if I know this is helpful and I see that no one has access to this, why am I not doing something about it? I thought I’m in the perfect position to start something.”

It was named after Wonders’ grandfather, who had three towering maple trees at the base of a large hill that was once his front yard. He walked four miles a day until losing a battle with cancer in 2007 at age 83.

“He was a key figure in my life and I wanted to do something to honor him,” Wonders said. “I looked at it as a ministry.”

Wonders says that when people get diagnosed with cancer they are “scared to death.” Exercise can help with that.

One newly diagnosed patient who came to Maple Tree early this year arrived in a wheelchair. She was overweight, depressed and had never exercised before.

“She said she couldn’t even go grocery shopping because she would get too tired,” said Wonders. “Seven months later, she doesn’t even need a walker. You can see the change in her, just in her eyes. I feel like she has more joy.”

MapleTree also has a faith-based component.

“These are people who are walking through the most difficult season of their life,” said Wonders. “Maybe they’ve never thought about mortality before. Now they have cancer, and that’s all they can think about. So I wanted to be able to offer them hope if that were to come up. It’s an option.”

“I really think the reason God has me on this Earth is to do Maple Tree,” said Wonders, a 39-year-old mother of seven children ages 2 to 12. “It’s part of who I am. It means so much to me. I could not imagine my life without it.”