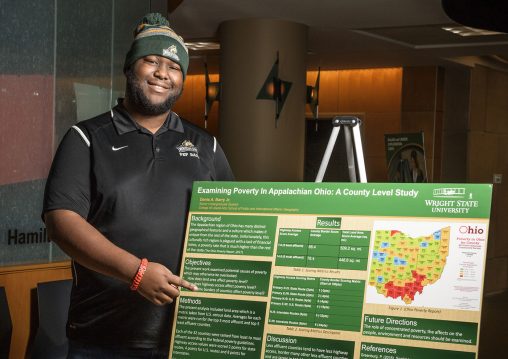 When he got his driver’s license at age 16, Denis Barry Jr. made it his goal to visit all of Ohio’s 88 counties. So far he’s managed 58.

But his passion for counties, maps, highways and a general love of exploring is pointing the Wright State University senior to a career in geography. And in October, Barry won first place for his research poster during the annual meeting of the East Lakes Division of the American Association of Geographers at Ohio Northern University.

“That was a huge validation of my work,” said Barry. “When I went there, I did not expect to place, let alone win. Knowing that the work I spent in the last year-and-a-half working on has paid off is really rewarding.”

Barry’s poster stemmed from his research into poverty in Appalachian Ohio on a county level.

“My goal was to look at poverty in a way that hasn’t been done before,” he said. “That’s when my two passions — counties and highways — came into play and using those metrics to somehow measure poverty.”

Barry concluded that the physical size of a county, its access to highways and poverty in surrounding counties can have a direct effect on a county’s poverty level.

Barry grew up in Mason and became interested in environmental science at Mason High School, where one of his classes tested the quality of tap water versus bottled water and also designed a rain garden.

After graduating in 2013, he attended Cincinnati State Technical and Community College majoring in environmental engineering. He then transferred to Wright State, where he was a little rattled by the large size of freshman biology — a class of more than 200 students.

At about the same time, he switched majors to geography after learning that part of that field can involve making maps, one of his passions.

“I spend a lot of my free time looking at maps,” he said. “And I have a working map of Ohio in my head.”

That’s what led to his “healthy obsession” with Ohio’s state highway system and visiting every Ohio county. He tries to hit several counties on each road trip. One of his longest journeys was taking U.S. 127 in southwest Ohio north into Michigan, a trip he documented with photos.

The state’s most interesting county to Barry so far is southwest Ohio’s Highland County, which has two different watersheds and a spiderweb of highways that converge on Hillsboro, the county seat.

“To me that’s just fascinating,” he said. “When U.S. routes go through a community, that means it is historically important. But I want to figure out why.”

After graduation, Barry would like to do something in the urban planning field or find a job in geographic information systems or in academia.

“Geography is such a broad field,” he said. “You have all of your different sub-categories of geography. You can look at physical geography, human geography, environmental geography.”

When he’s not studying, Barry holds down three jobs — an internship working in geographic information systems at Wright-Patterson Air Force Base, a job as a shift manager at a pizzeria and a third as a snowplow driver at the Cincinnati/Northern Kentucky International Airport.

He is also a member of the Wright State Pep Band, where he primarily plays the tuba. But he is musically gifted. He has taught himself to play virtually every musical instrument — from the piano to the guitar to the clarinet and saxophone.

“The reason I know how to play so many instruments is because it’s all pattern recognition,” he said.

Barry said his experience at Wright State shows him that the university focuses on the individual student. (His mother, Detrice Barry, is an associate professor in the Wright State College of Nursing and Health.)

“What is most special about Wright State is that it gives everybody an opportunity to fit in somewhere,” he said. “I was afraid I wasn’t going to fit in here. All of my passions are things that are not readily available. But I think there is something for everybody here.”

“I think that is how it set me up for success,” he said. “The poster came about only because I was curious. The university encouraged me to pursue that curiosity, figure out what’s behind it.”