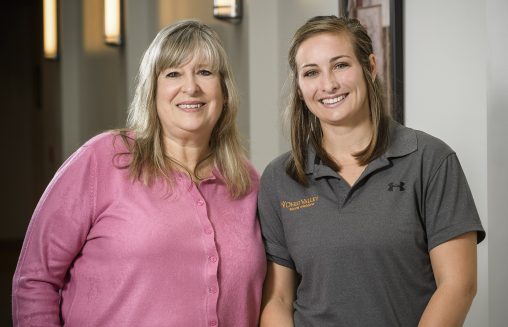 As the 14-year-old football player lay on the field with a possible spinal cord injury, the words of athletic trainer Miranda Martin’s Wright State University emergency response instructor kept ringing in her ears.

Martin, who had been treating a soccer player in the Southeastern school district near Springfield last August, was urgently summoned to attend to the injured football player at a nearby practice field. The player told her he had gone into a tackle incorrectly and now had no feeling in his leg.

“He was very scared, understandably so. But he was a trouper,” said Martin, who graduated from Wright State in 2016 with her bachelor’s degree in athletic training. “I was trying to keep him calm. I felt really calm and confident myself even though it was the first time I had to handle such an injury.”

Martin said she kept hearing the voice of instructor Rebekah Bower telling her what to do. Bower, director of Wright State’s Athletic Training Program, had drilled her students regarding how to respond to an emergency utilizing scenarios over and over until their reactions became second nature.

“I didn’t even have to think twice about anything I did,” said Martin. “I kept thinking back to being in our athletic training classroom and doing our practical exam in our emergency response class. Becky was asking me, ‘What do you do next?’ It was really weird.”

Martin had immediately grabbed the player’s helmeted head to keep him from moving and prevent any possible additional injury. After assessing his condition, she summoned EMS. When they arrived, they called for a helicopter to transport the player to Nationwide Children’s Hospital in Columbus.

Martin cut off the player’s jersey and carefully removed his helmet and shoulder pads so that EMS would be able to immediately respond to any cardiac or respiratory emergency that might occur during transport.

After securing the player on a spine board, Martin and the EMS personnel “hot-loaded” him onto the waiting helicopter, strategically avoiding getting too close to the pinwheeling rotor blades.

Martin is one of approximately 200 athletic trainers who have completed Wright State’s program since it was nationally accredited in 2001. Wright State grads account for 37 percent of the athletic trainers in the region, many of them working for local sports medicine centers, high schools and colleges.

The students take classes in anatomy and physiology, therapeutic exercise and modalities, assessment of orthopedic and general medical conditions, and pharmacology. The Athletic Emergency Care course certifies them as American Red Cross emergency responders. They not only learn how to tape, bandage and use ultrasound and electrical muscle stimulation equipment, but they also go on ride-alongs with Fairborn EMS and observe orthopedic surgeries. Some graduates go on to graduate school and medical school.

“It’s a perfect mix between medicine and sports,” said Bower. “You’re there when the injury happens. You provide immediate care. You provide on-going treatment and rehabilitation. And then you help get them back to participation. It’s a very gratifying field.”

Martin grew up in Springfield, playing softball and soccer as a young girl. She attended Northwestern High School, where during a career day as a freshman she was introduced to athletic training. For the next four years she served as a student sports medicine for the school’s athletics teams.

Martin decided to pursue athletic training as a career, enrolling at Wright State in 2012. A week after graduating in 2016, she was hired by Ohio Valley Sports Medicine, a Springfield-based facility that offers expertise on conditioning and sports injuries, including prevention, emergency care, clinical diagnosis, therapeutic intervention and rehabilitation.

As part of her job at Ohio Valley, Martin worked as an assistant athletic trainer in the Kenton Ridge High School district, covering football, soccer and other sports in the middle school and high school. She works as head athletic trainer at Northeastern High School.

She is also pursuing her master’s degree in food science and nutrition with a concentration in health promotion through an online program offered by Mississippi State University.

“I really honestly love working with the kids, and I love the medical field,” she said. “You see the kids at their lowest points and get to help them work through it and finally get to see them succeed at the end.”

One of Martin’s big successes occurred in August when she was covering for an athletic trainer on maternity leave in the Southeastern school district. That’s when she helped treat the 14-year-old football player who had lost feeling in his leg.

As it turned out, the player was suffering from a temporary condition of numbness called transient spinal shock and fully recovered.

“I felt 100 percent prepared for handling the injury,” said Martin. “It’s something that Becky trained us very well for. I felt like the situation couldn’t have gone any better.”