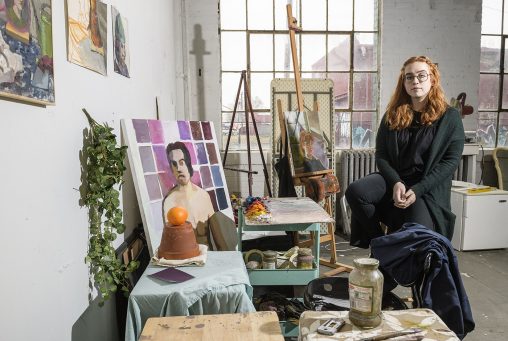 Eva Lewis, who graduated from Wright State in 2017 with a bachelor’s degree in painting, is one of several alumni working out of the Front Street Studio Gallery in Dayton. (Photos by Erin Pence)

The Front Street Studio Gallery, a complex of historic industrial buildings, is fast becoming a volcanic presence in the Dayton arts scene. And Wright State University alumni are part of it.

Built in the late 1800s and early 1900s, much of the warehouse complex was once a paper mill, the former home of International Envelope. Today, it is a honeycomb of art studios, galleries and small businesses.

Wright State alumni have their own official gallery. And at least a half dozen Wright State grads, including Dana L. Wiley, rent space for their own personal studios.

“It’s becoming a place to go and be,” said Glen Cebulash, professor and chair of Wright State’s Department of Art and Art History. “Things are really starting to come together. It’s a great development for Dayton.”

Front Street is essentially a factory where art — lots of it — is being made and displayed. The studios, galleries and shops feature everything from paintings, photography and sculpture to furniture-making, glass-blowing and even tropical fish.

And the buildings have a certain scruffy charm to them, with brick walls and concrete floors, soaring ceilings with exposed pipes, paint-spattered studios, graffiti-tagged hallways and vintage elevators that creak and wheeze.

Front Street has long been a magnet for alternative lifestyles. One of the buildings once housed an elaborate wooden bowl for skateboarders. And even today, graffiti artists sometimes steal into the buildings at night to leave their mark.

“There is a certain underground culture that’s here,” said Richard Lundin, who manages the property along with his wife, Carol. “I don’t want to erase any of that. To me, that is the magical part of Front Street.”

The spaces are populated by colorful characters. 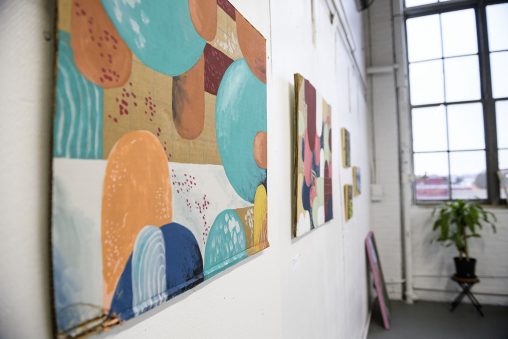 Carol Lundin recalled the time she encountered a naked woman in one of the hallways. The woman was being photographed by an artist whose work had been featured in Playboy magazine.

And one of the showings at Front Street attracted a group of juggalos, who are fans of the musical group Insane Clown Posse. Juggalos have developed their own slang and often wear face paint like that of evil clowns.

“We bring in creative types; it’s just very unpredictable,” she said. “But we like it because that creativity can inspire others.”

The Lundins got involved with Front Street after moving to Dayton from Chicago three years ago. They were introduced to the arts scene through Wright State’s annual ArtsGala and were bowled over by the artistic energy in the city.

Many of the artists at Front Street have contributed artwork to ArtsGala’s silent auction that is sold to support scholarships. Richard Lundin is curating Front Street’s contributions to the auction at the 2019 ArtsGala, which takes place April 13, and has commissioned some large-scale pieces of art.

Front Street is home to many talented and high-profile artists.

Mike Elsass, for example, is a well-known abstract artist who sands rusting sheets of metal and then applies colorful layers of paint. His studio at Front Street is a prairie of paint pots and brushes. Windows that pour light into his studio during the day offer a dazzling view of the illuminated Dayton skyline at night.

Cebulash said the juxtaposition of galleries with studios enables visitors to not only see the finished product but also how it’s made.

“For a lot of people it’s kind of fascinating to see how the artist works, what the materials are,” he said. “I think it just contributes to the sense that there’s something going on here.”

Of the 140 spaces at Front Street, 60 percent are art studios and galleries. The rest are small businesses that sell furniture, jewelry, crafts, candles, lotions and other merchandise. Front Street hosts workshops and open houses on the first Friday and third Sunday of the month. First Fridays have been well attended, attracting people who come to cruise the galleries and enjoy cheese, wine and music. During open houses in the summer, the streets around the buildings are blocked off and food trucks pull into the courtyard. Music, salsa dancing and movies have been part of the festivities.

Cebulash said the Wright State Alumni Gallery serves as a showcase for alumni who are active artists and have remained in the area, for alumni artists no longer in the area and for alumni who may have gone on to non-art careers but still make art as a hobby.

Director of the gallery is painter and alumnus Landon Jones, who serves on a volunteer basis. Jones helps alumni organize exhibits and even helps them put up their work, whether it be painting, photography, sculpture or printmaking. The gallery is open on First Fridays and Third Sundays by appointment. 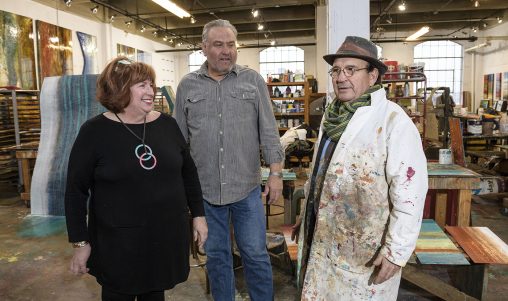 “So far, it’s been great,” said Cebulash. “Landon has this entire year already booked. We’ve got alumni from as far away as Illinois and Tennessee who are scheduled to have exhibitions. The space is getting a lot of traffic, and the alumni are getting some nice exposure.”

Cebulash said the gallery is a good way for alumni to stay in touch with each other and the Wright State art department. It also enables older more experienced alumni to connect with younger graduates and pass along their knowledge.

Carol Lundin said Front Street is thrilled to have recent Wright State graduates making and showing their art because participation by the next generation is key to a thriving arts community and a way to keep young artists in Dayton.

“Wright State sits directly in our target audience,” she said. “Those are the people you invest in who may stay here.”

One of the artists who shares a studio at Front Street is Eva Lewis, of Bellbrook. She graduated from Wright State in 2017 with a bachelor’s degree in painting and minor in art history.

“Being able to walk through other artists’ studios is very inspiring,” said Lewis, adding that connections she’s made at Front Street have resulted in her getting invited to display her work in art shows.

Richard Lundin says the success of Front Street has him thinking big. “Our long-range goal is to keep this community growing and really put Dayton on the map as far as the arts scenes go,” he said.