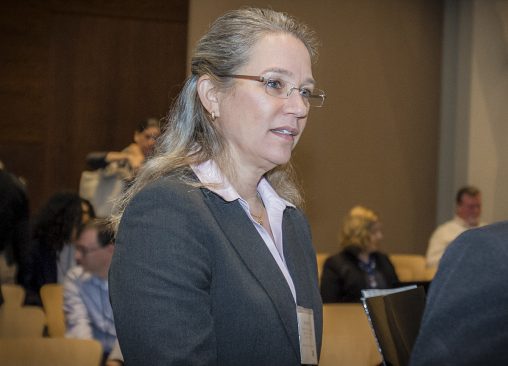 Dawn Wooley, professor of neuroscience, cell biology and physiology, is co-chair of a CDC working group charged with formulating a policy on bio-containment, safety and security.

Wright State University is playing a key role in a national effort to contain the deadly poliovirus in designated labs after it is eradicated from the global human population.

Dawn Wooley, professor of neuroscience, cell biology and physiology in the College of Science and Mathematics and Boonshoft School of Medicine, is co-chair of a working group formed by the Centers for Disease Control and Prevention (CDC) to formulate a policy on bio-containment, safety and security.

Wooley was recruited by the CDC in 2016 to serve on the Center for Preparedness and Response’s Board of Scientific Counselors, an advisory committee. In 2017, she was appointed to the newly formed Biological Agent Containment Working Group and currently serves as co-chair.

The World Health Organization has written a global action plan for how to contain polio. Each country must establish a national authority for containing polio, which in the United States will fall to the CDC.

“This is a really big deal because there is only one other virus — smallpox — that has ever been eradicated from the human population,” said Wooley. “When you eradicate something, you don’t want it coming back. The goal is to keep the poliovirus contained after its eradication, after it’s no longer circulating in the human population.”

Polio, or poliomyelitis, is a crippling and potentially deadly infectious disease caused by poliovirus. The virus spreads from person to person and can invade and infect a person’s brain and spinal cord, causing paralysis that can lead to death.

There is no known cure, but vaccinations have eradicated the virus in the United States and most of the rest of the world. Today, polio is believed to remain naturally spreading only in Pakistan, Afghanistan and Nigeria.

Patients with residual paralysis often used braces, crutches and wheelchairs to remain mobile. Also used in the treatment of polio was the iron lung, a respirator that helped with breathing.

“It was a devastating epidemic,” said Wooley. “There were people on iron lungs for their entire lives.”

Wooley is concerned that some countries may stop vaccinating for polio before it is safe to do so.

“We are going to need to vaccinate for a period of time to ensure that this disease doesn’t come back,” she said.

As co-chair of the Biological Agent Containment Working Group, Wooley is helping write policies on the containment of poliovirus. The working group meets twice a year at CDC headquarters in Atlanta and has monthly teleconferences.

“I’m honored, and I just love the work,” said Wooley, who has a special certification in biosafety. “These issues of containment are really important to me.”

Stocks of live poliovirus are maintained to manufacture vaccines and for research, such as investigating the possibility of developing the virus as a gene therapy to kill cancer.

The policy addresses security and safety issues in the storage of live poliovirus in designated polio essential facilities, including how stocks of the virus are secured, who has access to them and the availability of personal protective equipment. The sites will have to register with the CDC and undergo site inspections.

Wooley has been a long-time member of ABSA International, a biosafety organization, and currently serves on its Scientific Program Committee. At a conference last fall, she moderated a session on the poliovirus, its eradication and the policies she is helping write.

Wooley is coming off a four-year term with the prestigious Recombinant DNA Advisory Committee that advises the director of the National Institutes of Health. She was selected to serve because of her expertise in recombinant DNA — particularly in viral vector technology — and her knowledge in biosafety.