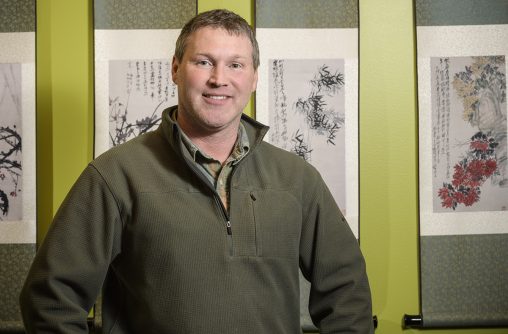 Wright State University is stepping up efforts to recruit international students, strengthen and expand its education abroad program, partner with faculty on internationalization efforts and build new international components into the curriculum.

For example, a new experiential education abroad program in Nepal will be launched thanks to a travel grant from Bill Holmes, associate vice provost for international affairs, to Andrew Froehle, an associate professor in the Department of Kinesiology and Health. A scenically spectacular country strategically nestled in the Himalayan Mountains between China and India, Nepal has long sent students to Wright State. Now Wright State will send students to Nepal.

“It’s going to be absolutely fantastic. We’ve never sent students to Nepal before,” said Holmes. “Dr. Froehle is working directly with the Study Abroad staff to develop the logistical program details while he and I are working on a State Department grant to help kick off the program and ensure sustainability.”

“That growth is faster than I’m seeing at any of my colleagues’ institutions,” said Holmes. “That’s telling me something — there is pent-up interest here that the institution has to meet.”

About half of Wright State education abroad students go on faculty-led Ambassador Programs, which typically last a few weeks. Some have been offered for years, but others are often not repeated. The other half are students who directly enroll at an overseas university for an exchange or enroll in an affiliate-run study program for a semester.

Wright State education abroad experiences include opportunities in approximately 60 countries, with Ambassador Programs in Italy, France, China, England, Poland and even the Amazon among others.

The Nepal Ambassador Program will begin in May 2020 and will be offered to students studying kinesiology and health, making it a unique opportunity for students in this academic area.

“This will be a unique program where our students get to engage with their disciplines, but in a very different culture and in a service-oriented role,” said Froehle. “I think the lessons they take from these experiences will be transformative.”

Holmes is also exploring education abroad opportunities with institutional partners such as Kumamoto University in Japan because of a “fantastic faculty-to-faculty relationship” already in place.

“There is no reason why, if we all support it top down and bottom up, Wright State cannot become a school-of-choice for students seeking a global education,” said Holmes

“We want to an education abroad to be an integral part of the Wright State academic experience by integrating programs abroad with our curriculum back here,” he added. “So students who choose to go abroad will still graduate on time, and it can be built into the financial aid package. Right now, many students are having to decide whether they may have to borrow more money or if it will delay graduation. If done properly, these tough choices can be mitigated.”

Holmes said studying abroad can be a life-changing experience, an opportunity to learn about oneself as well as become better prepared for the job market. In addition, education abroad students can sometimes become certified in certain fields not available for study at Wright State. And a good time to participate in education abroad, he said, is before starting a career and a family.

Holmes said data suggest that college graduates who study abroad earn about $1 million more in their careers than those who didn’t.

“A recent survey found about 40 percent of companies missed business opportunities because they lacked internationally competent staff,” he said. “With 95 percent of the world’s consumers outside the U.S., this makes education abroad an important educational imperative for Wright State.”

The university, which has about 600 international students, has expanded its recruiting to about 60 foreign countries and has out-sourced its efforts to full-time recruiters based in or near those countries. Its other strategic move is to reduce its reliance on sponsoring agencies, which often come and go.

A first-generation, nontraditional college student, Holmes earned his bachelor’s degree in history from Miami University in 1997, focusing on History, Russian and Russian literature. While an undergraduate, he studied and lived abroad in Hungary.

He returned to the Transylvania region of Hungary to research Hungarian and Romanian relations while pursuing his master’s degree in international affairs from the University of Wyoming.

In 2003, Holmes and his wife joined the Peace Corps and lived in Ukraine for two years. After that, Holmes’ career became a fast-paced learning experience, with him taking leadership positions at universities and education abroad organizations.

In 2010, Holmes and a colleague wrote a how-to manual for faculty looking to create programs abroad. The manual is now used by universities across the nation as a resource for their study abroad offices and faculty.

For over a decade, Holmes has been a faculty and staff trainer in risk management, immigration, program development and served in elected and volunteer leadership positions at the state, regional and national levels.

He was named associate vice president for international affairs at Wright State in 2017.

“There is an opportunity to do something here,” said Holmes. “The people here in this office are some of the most dedicated people I’ve ever worked with.”