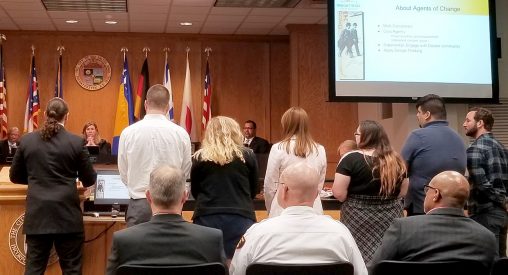 Wright State students in the Agents of Change course presented to the Dayton City Commission on April 17.

Students in a Wright State University community-engagement course made a formal presentation to the Dayton City Commission on their projects, held a working session with several commissioners and even spearheaded the crafting of a mayoral proclamation.

The April 17 event at Dayton City Hall was the culmination of a new Agents of Change course and Change the World initiative launched by the College of Liberal Arts.

The course is taught by Ashley Hall, assistant professor of English language and literatures and co-director of the New Media Incubator; and Laura Luehrmann, professor and director of the Master of Arts Program in International and Comparative Politics.

“The key issue teams focused on food, public health, education and transportation/access to resources,” said Luehrmann. “And we are all working to sustain the efforts only just started by the students this semester.”

A major part of the students’ initiative involved supporting the Dakota Center in Dayton’s MacFarlane neighborhood, a low-income enclave populated by more than a few abandoned houses and vacant lots. The center has become a refuge and source of learning and recreation for many of the neighborhood’s children and seniors.

The students served as mentors in an after-school program and worked in the center’s community garden. Many of the students plan to continue volunteering at the center this summer. Luehrmann said there are also plans to set up a Fellows program through which students will lead teams to expand partnerships in the neighborhood.

“We want to make sure these relationships and efforts endure,” said Luehrmann.

In addition to the Dakota project, students Peyton Clark and Nick Latessa spearheaded the drafting of a proclamation for Mayor Nan Whaley declaring Gem City H.O.P.E. (Hold on Pain Ends) Day on April 18 to celebrate, encourage and thank those who help residents recover from opioid addiction. “Through our continued efforts on this front, we will work tirelessly to continue to bring hope to our community and build the understanding that treatment can work, people can recover, and that our great city will not be defeated by the plague of addiction,” the proclamation declares.

Interest in the course was high. Even though students had to fill out an interest form to get into the class, the 25 slots filled up quickly and spilled over into a waiting list.