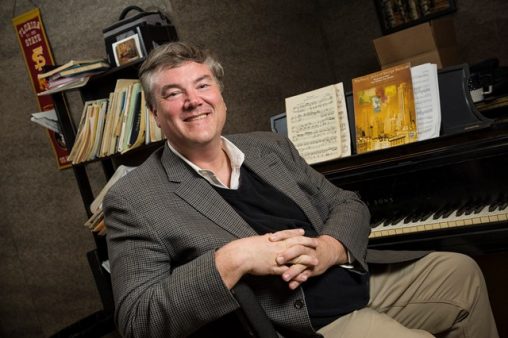 The Fort Worth Opera performed excerpts from an opera about the infamous Hatfield and McCoy feud by Steven Aldredge, piano instructor in the Wright State School of Music.

It’s like hitting a home run in your first Major League at-bat. Wright State University composer and piano instructor Steven Aldredge’s first opera, “The Hatfield-McCoy Triptychs,” was one of five performed by the Fort Worth Opera in a prestigious showcase event.

“It’s big,” said Aldredge, music director of the Wright State Opera Theater’s spring production. “The Fort Worth Opera is one of America’s great opera companies. They also are really interested in new works. So this showcase is one of the few opportunities for composers who write opera to submit their work and, if selected, have it performed.”

Almost as impressive as having excerpts of his opera performed in Fort Worth is the gravitas of Aldredge’s subject matter — the historic Hatfield-McCoy feud, a bloody decade-long dispute that claimed the lives of more than a dozen members of the two families.

“What people don’t realize is just how violent the story actually is,” said Aldredge. “It’s really devastating. It goes to the heart of a lot of core elements of American life.”

Aldredge, who grew up in the foothills of Greenville, South Carolina, was inspired by his own Appalachian heritage after stumbling across a newspaper photo of the matriarchs of the Hatfield and McCoy families. He envisioned the two women standing on separate sides of the stage singing a duet.

He researched the feud by reading historical accounts as well as family histories and then two years ago began writing the “The Hatfield-McCoy Triptychs.” Small parts of the opera have already been staged at Wright State so Aldredge could get some feedback.

The main characters are “Devil Anse” Hatfield and Randolph “Ole Ran’l” McCoy, patriarchs of the two clans who lived on the Kentucky-West Virginia border. Between 1880 and 1891, their dispute claimed the lives of more than a dozen family members. The Hatfield-McCoy feud has become a synonym for family honor, justice and revenge.

“I have had to figure out if I’m willing to put all of the violence that actually happened into this opera because it is unremittent,” said Aldredge. “As violent as operas sometimes are, the Hatfield-McCoy feud is shocking in its brutality — even for opera.”

Aldredge’s work and the other operas were performed on May 8 and 9 at the Fort Worth Botanic Garden Auditorium.

Aldredge’s opera runs about two-and-a-half hours, but only about 20 to 25 minutes of it was staged by the Fort Worth Opera, which provided the actors and music. The showcase attracted directors of opera companies from around the country, who watched the operas and offered their feedback.

“Set deep in the Appalachian Mountains, on the border between good and evil, composer and librettist Steven Aldredge’s ‘The Hatfield-McCoy Triptychs’ recounts the epic American story of betrayal, love and the destructive force of revenge as it scorches a trail of unspeakable violence across generations,” the Fort Worth Opera said in its news release.

Founded in 1946, the Fort Worth Opera is the oldest continually performing opera company in Texas and one of the 14 oldest opera companies in the United States. It has taken a leadership role in engaging audiences beyond the operatic stage while producing cutting-edge, contemporary operas.

Aldredge studied piano performance at Florida State University, where he was a graduate assistant in opera coaching; he continued his studies as a D.M.A. candidate and teaching assistant at the University of Cincinnati’s College Conservatory of Music.

Aldredge has performed internationally with leading soloists from the Metropolitan Opera and recording artists from such major labels as Naxos and EMI. He has given recitals with principal players from many of the world’s leading orchestras, including The New York Philharmonic, The Vienna Philharmonic, The Bavarian Radio Orchestra and the Pacific Festival Orchestra of Sapporo, Japan.

Aldredge has composed over 70 works, winning praise for both his vocal and instrumental works. His award-winning choral works are published internationally through Colla Voce, Soundforth, Lorenz and The Sacred Music Press.