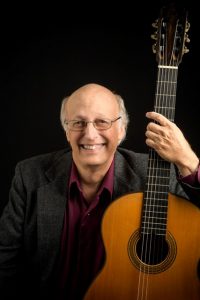 McCutcheon was honored for the third movement of a concerto he wrote titled “Mirkin Concerto for Classical Guitar and Strings.”

McCutcheon said he worked on the piece on and off for about a year.

“The three judges’ comments were delightful and informative, and they all really understood what I was doing with the work,” he said.

McCutcheon said the piece was inspired by David Mirkin, professor of pathology and pediatrics at the Wright State Boonshoft School of Medicine and director of the Pathology and Clinical Laboratory at Dayton Children’s Hospital.

McCutcheon said Mirkin, an ardent advocate of the arts and a lover of classical guitar music, had attended the premiere of a serenade McCutcheon had written for guitar and strings. After the performance, Mirkin told McCutcheon it would make a nice second movement.

“‘So you mean I need to write a first and a third movement to complete a concerto?’” McCutcheon asked. “He nodded, and I went straight to work on the third movement.”

McCutcheon is artist-in-residence at the University of Dayton and also adjunct faculty at Miami University. He has made four recordings for adults and two for children and written several publications of guitar compositions and instruction books. He has also produced a weekly classical guitar program, “The Intimate Guitar,” on Dayton Public Radio for the past 30 years.