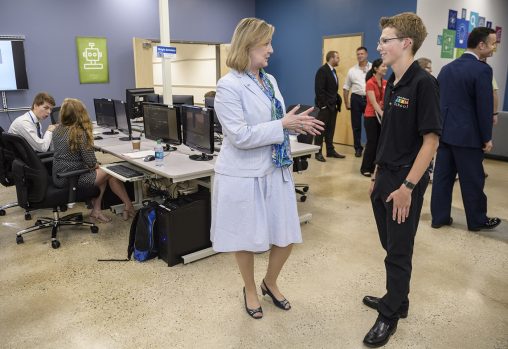 The Dayton Regional STEM School, an affiliate of Wright State University, cut the ribbon on a major expansion that includes the nation’s only gaming research laboratory in a public school in partnership with the Air Force.

In addition to the 30,000-square-foot expansion of the school, the ribbon-cutting also marked the partnership and co-location of the Air Force Research Laboratory’s Gaming Research Integration for Learning Laboratory (GRILL).

“Wright State is proud to be part of this school and this event,” said Schrader. “The Dayton Regional STEM School has been providing a pipeline of student excellence into the community and the gaming research laboratory is just the latest example of that.”

The GRILL will focus on gaming software development for the Air Force and in school curriculum around the state. The lab is filled with computers and equipment to create augmented and virtual reality worlds and features helicopter and parachuting simulators.

“As a student, I’m excited to have this cutting-edge technology and research happening just down the hall,” said Kyle Eskew, an 11th grader at the school.

The students will be challenged to solve problems such as how to get robots to respond to voice commands and how to build self-driving cars. Solutions with merit may be matured and applied by the Air Force.

“This is a dream come true for all of us,” said Wink Bennett, of AFRL’s Warfighter Readiness Research Division.

Bennett said AFRL has had a long partnership with Wright State and the Wright State Research Institute and that it continues to grow. He credited Dennis Andersh, WSRI executive director, with helping obtain state grants to fund the GRILL movement to the STEM school.

“I’m looking forward to what comes next because we have some exciting opportunities for the kids moving forward,” said Bennett.

David Goldstein, professor and chair of the Wright State Department of Biological Sciences and president of the Dayton Regional STEM School Board of Trustees, said the partnership between a public school, a university and the GRILL has the potential to be a national model for developing a pipeline of education and career preparation.

During the ribbon-cutting, a proclamation from Ohio Gov. Mike DeWine and Lt. Gov. Jon Husted was read.

“This collaboration between the Air Force Research Laboratory and the Dayton Regional STEM School will inspire more students to pursue technical skills required by the Air Force and related industries,” the proclamation said.

Ohio Congressman Mike Turner, who serves on the U.S. House Intelligence Committee and as a subcommittee chairman on the House Armed Services Committee, called it an exciting day for the community and the students.

“Every day when they get up and go to school, what they’re learning contributes to what they’re going to go do in the future,” said Turner.

The public school, which opened in 2009 with Wright State as a co-founder, uses project-based learning to teach students in grades six through 12. The students participate in inquiry and project-based instruction that marries traditional STEM content with social studies, language arts, the fine arts, and wellness and fitness.

The expansion – which also includes five new classrooms, the Vectren Innovation Lab and a place for school assemblies with a small stage – will enable the school of 670 students to increase its population by about 120 students by 2025.

“The relationship with Wright State is fundamental to this school,” said Goldstein. “I’m amazed to see in 10 years what this place has become.”