When they step up to the counter, customers walk by Annabelle. The statue of the black-and-white Holstein is part of the cow theme at K&J’s Ice Cream in Sidney. The drapes and cups also bear bovine images.

It’s all part of a new business opened by Wright State University accounting major James Curlis and his mother, Kim.

The rough-plank wooden floor and vintage signs that say “Ice Cream Solves Everything” and “Life Is Better With Ice Cream” add to the old-fashioned ice cream parlor vibe.

“What’s special about us is that it very much feels like it’s a family-owned business that offers high-quality service and we offer high-quality product as well,” said Curlis. “…Some of the flavors and names of our ice cream you will never find anywhere else.” 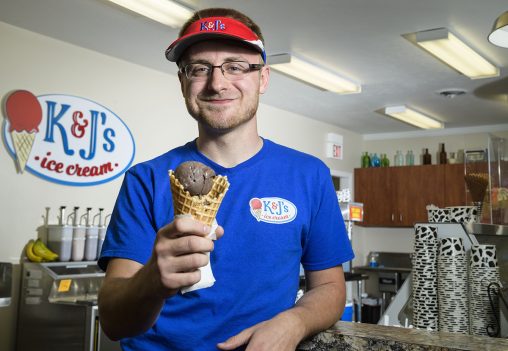 He discovered it at an ice cream convention. “I took one bite and said, ‘This is it,’” he said. “‘I haven’t had anything better than this.’”

Curlis grew up in Sidney. His father, Bob, worked as a pharmacist and owned a Medicine Shoppe pharmacy and later his own pharmacy. His mother helped manage the business.

When Curlis was 10, he started his own lawn mowing business and built it up to 10 customers.

“Growing up I was always around the entrepreneurial spirit,” he said.

His father would joke that in his next life he wants to be in the ice cream business because the customers are always happy. That stuck with the young Curlis, and his career interest was shaped by his parents’ involvement in small business.

“I liked working hard and seeing the benefits from that,” he said. “That’s why I think I have a yearning, a desire, to stay in business.”

Curlis graduated from Christian Academy in Sidney in 2017 in a graduating class of 10. He was attracted to Wright State by its size, affordability and family feeling.

“My experience has been fantastic at Wright State,” he said. “It’s given me so many opportunities, not only as a student but as a person.”

Curlis has worked in the Office of Campus Recreation as an intermural official. He is the director of internal affairs for Student Government and works in the Student Union as a business services assistant.

“My classes have given me a lot of experience, knowledge I never would have gotten outside of Wright State,” added Curlis, who will begin his junior year in accounting this fall. “It’s just been a very positive experience.”

After his father sold the pharmacy, Curlis’ mother asked her son if he wanted to invest with her in an ice cream store. So the two of them began to look into it.

“We did some research on ice cream and how to start a business,” he said. “We talked to business owners who opened up ice cream businesses and asked their opinion.”

On April 13, Curlis opened K&J’s Ice Cream on the former site of his father’s pharmacies. The K stands for Kim and the Curlis’ three daughters, Kayla, Kelly and Katelyn; the J for James, who handles day-to-day operations.

“Our hand-dipped ice cream has been selling out faster than anticipated,” Curlis said. “In fact, we’ve had to make a few emergency calls (for more).” 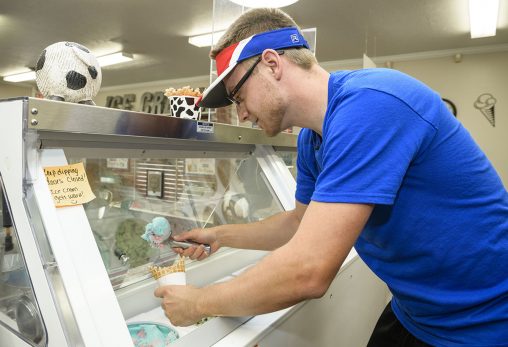 James Curlis has also worked for the Office of Campus Recreation and in the Student Union and serves the director of internal affairs for Student Government.

A single-dip of ice cream in a cake cone sells for $3; a single-dip waffle cone is $4. The waffle cones are made in-house every morning, sending a heavenly bakery-like perfume throughout the store.

Curlis said the store’s atmosphere is a big part of its appeal.

“We want to try to create a unique feeling, a unique product for consumers that makes them want to come back,” he said.

After graduation, Curlis would like to pursue his master’s degree at Wright State, either in accounting or an MBA. He would also like to open a second K&J’s Ice Cream near the university.