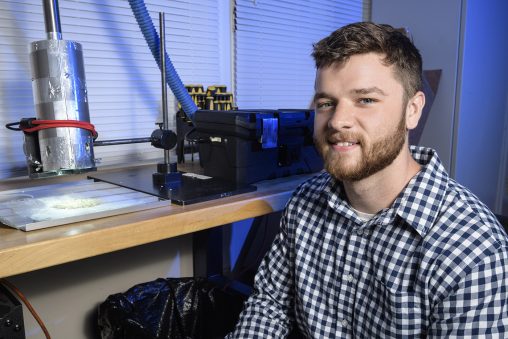 As part of an internship, Joseph Carroll, a mechanical engineering major at Wright State, experimented with a high-intensity light to kill weeds. (Photos by Erin Pence)

Helping to perfect a way to kill weeds without saturating the soil with harmful chemicals has become a big part of the working life of Wright State University engineering student Joseph Carroll.

Carroll can often be found at the offices of Global Neighbor, Inc., experimenting with high-intensity light — a death ray for weeds and their seeds.

“We are actually using directed energy, which is primarily different wavelengths of light, to kill weeds and make weed seeds unviable without regrowth,” he said.

Carroll’s work has resulted in his selection as the 2018-19 Intern of the Year of the College of Engineering and Computer Science.

In his letter nominating Carroll, Global Neighbor founder Jon Jackson said he has worked with more than 50 interns over the years and that Carroll “definitely stands out.”

He said Carroll thoroughly researched floral attributes, wavelength emissions and worked with his professors and outside labs to gain a strong technical foundation. And he crafted experiments to show that a directed-energy technique could make weed seeds inviable, an extension to the technique.

“The great thing about Joe is we challenged him with a lot of stuff that no one’s done before,” said Jackson. “Most interns need to be baby-stepped through the work. Joe was much more independent.”

Carroll grew up in Kettering. His father is operations manager at a Dayton machine shop and also races stock cars. Carroll remembers hanging out with his father at the Shady Bowl Speedway as a young boy, playing with toy cars in the dirt.

“I grew up around race cars,” he said. “How things work has always intrigued me since a young age.”

Carroll recently bought his own stock car and has begun racing competitively. In his first race, last fall, he finished ninth in a field of 64.

“It was pretty crazy,” he said. “I had never done anything like that before. It’s definitely an adrenalin rush. It’s like being on a roller coaster without the security of being strapped in.”

After graduating from Fairmont High School in 2015, Carroll enrolled at Wright State, drawn by the university’s reputation. He majors in mechanical engineering and is scheduled to graduate at the end of the fall semester.

In the summer of 2017, Carroll began his internship at Global Neighbor, a Centerville company that makes NatureZap, a tool sold for residential use that kills weeds without the use of harmful herbicides. 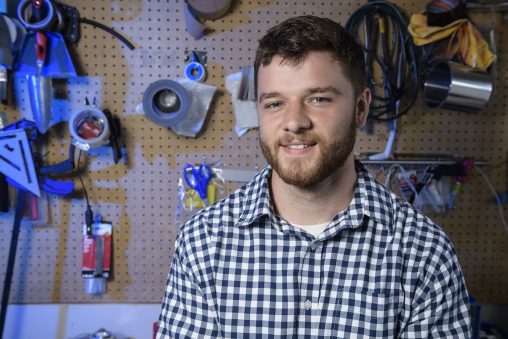 Joseph Carroll is interested in getting involved in green technology as a career after he graduates from Wright State.

Jackson founded Global Neighbor in 2002, but the energy efforts started in earnest in 2014. The company outcompeted more than 100 other organizations to win a contract from the Defense Department to develop technology to kill weeds without the use of chemicals. Global Neighbor is currently working on modifying its technology for agricultural use.

“The use of chemicals is a very big issue in agriculture,” said Carroll. “We’re so dependent on chemicals that there is almost no way around it unless something like we’re doing takes the forefront.”

Carroll has helped prove the high-intensity light technology for agricultural use and develop multiple proofs of concepts that are patent pending. He said the next step is to commercialize it as an agricultural product that is energy efficient and effective.

Carroll is interested in getting involved in green technology as a career after he graduates. That doesn’t surprise Jackson.

“Joe rose to the challenge to help a small technology company create a ground-breaking solution to help reduce herbicide-related issues,” Jackson wrote. “He represents the best of WSU.”