The FitDesk bikes were installed in May in a second-floor study area facing a bank of windows.

“It’s a way to have some non-sedentary study time where if you feel like you need to move a little bit, you can do that,” said Mandy Shannon, head of instruction and research services at the University Libraries. “We’re not looking at it to be a workout.”

Krishel Stout, a senior nursing major from Circleville, works in the library as a student assistant at the circulation desk.

“I like alternating between sitting and moving around a little bit,” she said. “Spending hours in the library and not moving you get stiff and tired. So I feel like this is good option for people who do like to sit still but do need to move around some.”

Stout said you can pedal at your own pace and track your mileage so you know how much exercise you have gotten in.

The idea for the FitDesk bikes came during a mini-retreat last summer when library staffers were brainstorming about the needs of students. That led to some research into treadmill desks.

An article in Inside Higher Ed reported that a growing number of university libraries were using FitDesk bikes. And some studies have found there might be some benefit to it. A study published in 2017 in Frontiers of Neuroscience found that college students studying at traditional desks reported more ease of studying and more effective studying than those using stationary bikes, but the two groups performed equally well on tests in an introductory psychology course. And the students using the traditional desks reported a decrease in sleep quality later in the semester while those using the activity workstation reported stable levels of sleep quality. 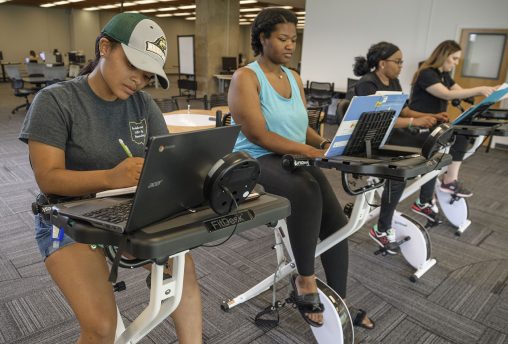 The Friends of the Libraries saw an opportunity to further their mission of supporting the Wright State University Libraries by providing the four bikes.

“The day they got installed, there was a group of four students from the medical school using them. They were very excited about it,” said Shannon. “And our social media team said it was the most engagement we’ve gotten from a social media post.”

A FitDesk bike is designed with a desk that expands enough to support a laptop and features props that can stand up textbooks, notebooks and magazines. The bikes can accommodate users from 4 feet 10 inches tall to 6-foot-6 and support up to 300 pounds.

“They are incredibly quiet,” Shannon said of the bikes. “The noise of a keyboard on a laptop is louder than the bike itself.”

No reservations are required to use the bikes. It’s first-come, first-served and there are no time limits.

Natalya Foster, a senior from Trotwood majoring in rehabilitation services, said she spends a lot of time in the library.

“I like going to the gym but sometimes it’s hard to go to the gym and go to the library. So having this here is a good way to do both,” she said. “And I’m getting studying in while exercising so it’s a win-win situation.”

She says the peddling does not distract her from studying and that she will probably use the FitDesk bike every time she comes to the library unless other students are using them.

“I feel a lot of students will find it’s very enjoyable,” she said. “There’s a nice view and it’s just a fun thing to do.”

Shannon said groups of students sometimes study together on the bikes.

“While it might not meet some of the historical stereotypes about what a library is,” said Shannon, “to me it very much reflects the spirit of a modern library and that we’re trying to meet the needs of our users.”