2019 Wright State grad Carissa Myers is off to earn her Ph.D. in physics with prestigious National Science Foundation award 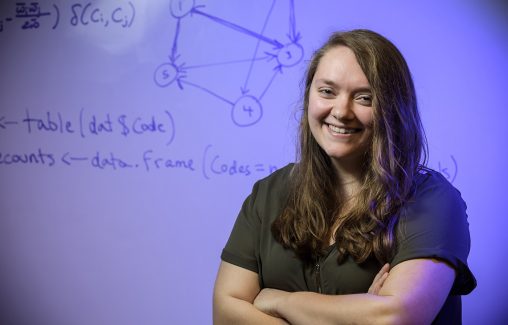 Carissa Myers, who graduated from Wright State in May with a bachelor’s degree in physics, will pursue her Ph.D. at Michigan State after receiving a National Science Foundation Graduate Fellowship. (Photo by Erin Pence)

Physics was simply an irresistible gravitational force for Carissa Myers.

Even though she found the subject challenging, struggled with it in high school and initially picked chemistry as her college major — physics won out in the end.

“It was a really big deal for the department and for Carissa when she got the fellowship. It is super competitive,” said Myers’ mentor Adrienne Traxler, assistant professor of physics. “I’m excited about the work that she’s going to be doing for it because it’s focused on opening the doors for other future students in physics.”

Myers grew up in Cedarville but attended Southeastern High School in South Charleston her final three years of high school.

She wanted to pursue teaching, inspired by her high school teachers and the enjoyment she got out of helping fellow students with their homework. But she wasn’t sure what she wanted to teach. However, she realized she enjoyed the sciences, especially physics.

“I did physics for fun, to some extent,” she said. “If I was upset during the day, I would go do physics homework and it would make me feel better, weirdly enough. I liked the mental challenge behind it.”

However, she actually struggled with physics in high school. So after enrolling at Wright State in 2015 as a first-generation college student and with a valedictorian/salutatorian scholarship in her pocket, she declared chemistry as her major.

But that changed after she took her first physics course with Traxler.

“I basically studied physics all the time even though I had other courses because I enjoyed doing it,” said Myers.

She also became a learning assistant for Physics I and II.

“Being a learning assistant helps you learn how to communicate your thoughts with other students,” she said. “So talking about physics is one way of learning. I don’t think you ever actually learn something until you can communicate it and teach it to someone else.”

Myers conducted several research projects in physics education at Wright State. One involved analyzing relationships between groups of students taking an Introductory Physics class, looking at whether students who have strong relationships and are highly connected with their fellow classmates do better academically in the class.

Myers analyzed the students’ online physics discussion forums to see if there was something in those group conversations helping them learn.

“If you could prove that group work is actually helping students, then active learning is very effective,” she said. “So understanding what it is about group work is causing that correlation is really important.”

Myers graduated May 4 with a bachelor’s degree in physics and has no debt from attending college.

“It’s really good to be able to say that. Wright State was a huge part of helping me fund my education,” she said.

Myers paved the way for her fellowship at Michigan State when she won an NSF Research Experiences for Undergraduates award and spent last summer conducting physics education research at Michigan State.

“I highly recommend it for other students,” she said of the undergraduate award. “It was life-changing.”

Myers said she would not have been able to accomplish what she has without Traxler’s knowledge and support.

“And the other physics professors are just as good,” Myers said. “All of them have helped me be where I’m at. My education would not be what it is.”

“She thinks about things carefully and deeply. And she’s really good at explaining her thought process,” said Traxler. “She is also very collegial. She works well with other students. She pushes the people she works with to go a little further.”

Myers will begin working on her Ph.D. in physics at Michigan State in July.

“I will have a lot of knowledge of physics, but a big part for me is becoming more of a researcher,” she said. “I want to become a professor at a four-year institution where I both teach and do research.”