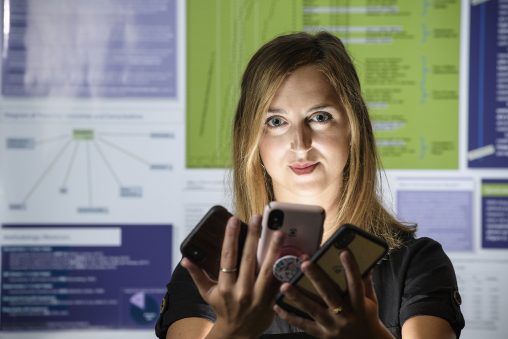 Research by Sarah Fryman, a Wright State biology graduate and current Master of Public Health student, found that one’s fear of not being able to use their smartphone can be magnified by personality traits. (Photos by Erin Pence)

When Wright State University graduate student Sarah Fryman does her homework, she has to hide her smartphone in the other room.

The technology has grown into a siren’s song of temptation, with Facebook, Instagram, YouTube, Snapchat, emails, texts and other distractions. Fryman finds its mere presence makes it hard to study.

“A lot of people are addicted to their cellphones,” she said. “How has it come to this?”

Fryman’s research suggests that nomophobia — or one’s fear of not being able to use their smartphone — can be magnified by personality traits. It concludes that cellphone addiction should be further studied among a larger population, especially among women and people with social anxiety.

Fryman grew up in Englewood. She was a straight-A student in high school, but science classes were the toughest for her. So when she got her first B, in biology, it lighted a fire.

After graduating from Northmont High School in 2014, she enrolled at Wright State to study biology.

“I got really challenged in undergrad,” she said. “But it worked out and I got accept into grad school.”

“All of the students I’ve met here and the faculty have aided me so well in my education, especially on the research side,” she said. “I felt that the faculty really believed in me.”

One of those faculty members is William Romine, associate professor of biology, who helped Fryman come up with the idea to research cellphone addiction when she was an undergrad.

The two decided that the best approach was to do a survey. Last summer Fryman sent out questionnaires of about 70 questions to Wright State students and faculty members about their smartphone usage. She received 175 responses, most of them from students.

Fryman found some evidence that smartphones were interfering with the daily lives of respondents. Some confessed that their smartphone usage had resulted in fights with their spouse or partner, that they had trouble staying off Facebook at school or work, and they sometimes had to hide their phones from themselves.

It was no surprise that many respondents use their smartphones while driving. Some said they only read emails and texts, but others confessed to writing emails and texts while behind the wheel.

The survey suggested that females are significantly more addicted to smartphones than males, Fryman said. 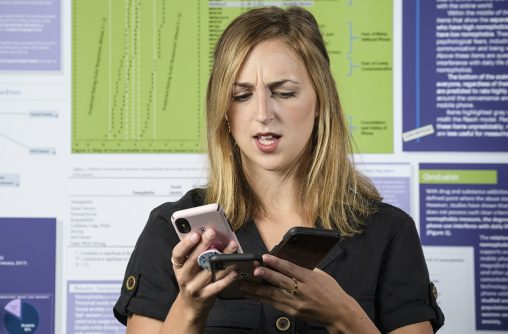 Sarah Fryman presented a poster on her research into cellphone addiction at the Association of Psychological Science symposium in Washington, D.C., in May.

“I think it mostly has to do with the safety of having your cell phone,” she said. “I recently left my phone at home and worried about being vulnerable if my car broke down on the highway.”

A person may call and talk to a friend on their smartphone while walking to class at night for safety. Or they may pretend to be talking to someone when walking by a group of suspicious strangers to try to deter any threat.

“It is a protective shield,” said Fryman.

Studies have shown that some people use their smartphones to avoid direct social interactions. And then there is “communifaking,” pretending to use your phone to avoid face-to-face social contact.

“Sarah’s research is unprecedented in its detailed empirical description of nomophobia as a measurable psychological trait,” said Romine. “Her work really sets a foundation for efforts to better understand risk factors and ultimately developing strategies for treating the disease.”

Fryman said smartphone users need to take a hard look at their usage and decide if they are endangering others on the highways or if it is hurting relationships with friends, family and co-workers.

The project has resulted in Fryman herself taking a fresh look at her smartphone usage.

“I have definitely been keeping tabs on it, and I have some friends who are tracking their usage,” she said.