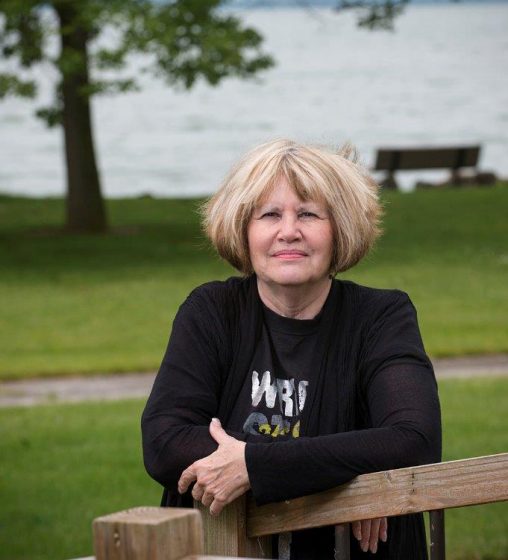 A memorial service is set for Bonnie Mathies, former dean of the Wright State University-Lake Campus and longtime faculty member and administrator at the Dayton Campus.

During Mathies’ eight-year tenure at Lake Campus, the campus experienced surging enrollments, a nearly doubling of bachelor degree programs, construction of the first residence halls and the purchase of nearly 40 acres for expansion.

In lieu of flowers, memorial contributions may be directed to the Bonnie K. Mathies Scholarship with the Western Ohio Education Foundation at the Lake Campus. For more information, contact Gretchen Rentz at 419-586-0336.

When she arrived at the Lake Campus in 2007 as associate dean, Mathies brought with her a world of experience teaching at Wright State’s Dayton Campus as well as at city schools in Cleveland and Toledo.

Mathies quickly won the hearts of the Lake Campus community, which found her to be interested, engaged and willing to contribute.

In a 2015 interview shortly before retiring as Lake Campus dean, Mathies said one of her proudest achievements was further developing the quality and diversity of the faculty on a campus that draws students with a strong work ethic.

Mathies grew up in Point Place, a Toledo neighborhood that nudges Lake Erie. Her father was a power engineer at Toledo Edison.

Mathies enrolled at the University of Toledo in 1960 with an engineering career in mind. But she quickly decided to become a high school biology teacher instead.

After receiving her bachelor’s degree, she took a job with Oberlin, Ohio, city schools. She later returned to Toledo, where she taught English, history and biology in the public schools until 1974. 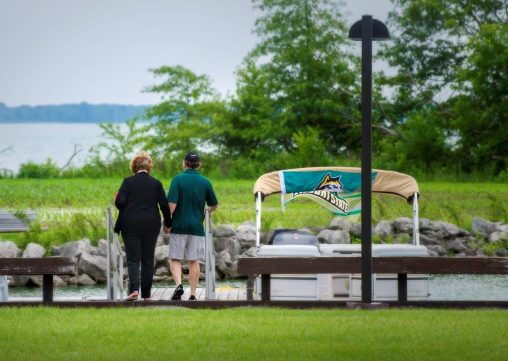 Bonnie Mathies with her husband, Bill, at the Lake Campus shortly before she retired in 2015.

Mathies retired in 2007, but it lasted only a few weeks. She quickly accepted an offer to become associate dean of the Lake Campus and was named Lake Campus dean in 2010.

“The community looks at this as their campus,” she had said. “They take great pride in it and see it as an asset. That’s the thing that’s really important.”

In June 2015, Celina Mayor Jeffrey Hazel and the City Council issued a proclamation thanking Mathies for her contributions to the campus and the community.

Mathies will be remembered for her legacy of giving to the Lake Campus of Wright State University. She and her husband, Bill, not only donated to brick and mortar projects, like the extension to Andrew’s Hall, which is set to open this fall but also to scholarship opportunities that could benefit the heart of Lake Campus — students. Mathies has an endowed scholarship for middle childhood education students and was very close to endowing a second scholarship for Lake Campus students.