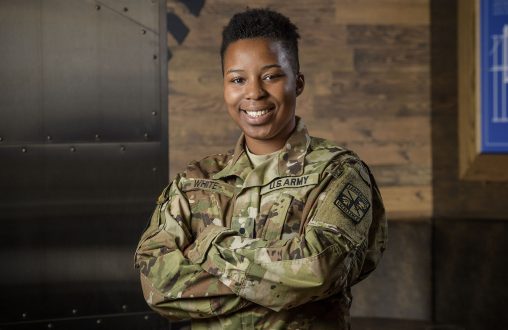 Faith White, a cadet in the Wright State Army ROTC, intends to serve at least four years of active duty in the Army after graduating in December with a biological sciences degree. (Photos by Erin Pence)

In fact, after all of the running and calisthenics — she needed a pep talk from her mother to carry on.

“I was so out of shape. I hated it,” White recalled. “But after I got into the groove of things, I realized it wasn’t as bad as I thought. I found a love for it and I understood more about what Army ROTC does and how they mold their cadets to be leaders.”

Not only did White get through the physical training, but in her first year in school she was selected to be on the 10 Miler Team and travel to Washington, D.C., to run against university ROTC teams and other competitors from around the country. And she later competed in a power-lifting competition at Wright-Patterson Air Force Base.

But the highlight of the ROTC experience for the senior biology major was being accepted into the Cultural Understanding and Leadership Program and assigned to Madagascar, an island nation off the southeast coast of Africa.

“I got an understanding of their culture and an appreciation of my culture,” she said. “I was very humbled after that experience.”

White grew up in Dayton with eight brothers and sisters. She loved school; academics came easy to her.

“I was always interested in biology, any type of health, anything to do with the body,” she said. “I knew I wanted to be a doctor at a young age. And I still do.”

After graduating from Chaminade-Julianne High School in 2015, she enrolled at Wright State, attracted by the financial aid she was offered. She declared biological sciences as her major with a concentration in applied physiology.

White said she always admired men and women in the military but didn’t think of it as a possible career until she was approached at Wright State by an Army recruiter. So she decided to give ROTC a try.

“I always believe things happen for a reason,” she said.

White said ROTC has enabled her to grow by putting her outside of her comfort zone. And many of her professors are just as tough academically.

In the summer of 2017, White did an internship with the Center of Microbial Pathenogenesis at Nationwide Children’s Hospital in Columbus, comparing the DNA of bacteria. 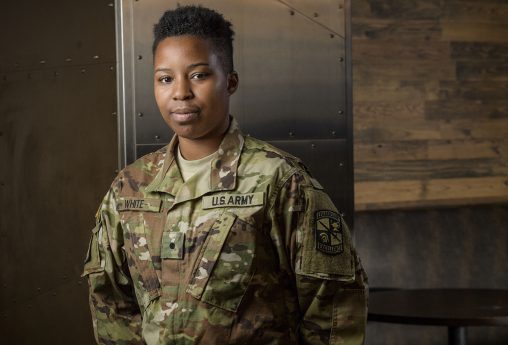 Faith White served in Madagascar as part of the ROTC’s Cultural Understanding and Leadership Program.

“We were figuring out how certain bacteria survive and what causes them to live in the lining of our bladder, specifically urinary tract infections,” she said.

At the end of her four-month-long internship, she made a presentation of her work to the scientific community.

Then in 2018 came Madagascar. White and other selected cadets met at Cadet Command Headquarters at Fort Knox, Kentucky, and underwent critical-mission training. Then they departed with their teams to their designated countries.

“My heart was pounding. I thought I’m really leaving the United States, going across the world,” White recalled. “I always wanted to go to Africa. I had tears in my eyes.”

Madagascar is one of the world’s least developed countries, with a low quality of life for a majority of its citizens. Ecotourism and agriculture, paired with greater investments in education, health and private enterprise, are key elements of the country’s development strategy.

White and fellow cadets worked at the Malagasy Military Academy in the capital city of Antananarivo. She helped teach English to the Malagasy cadets and learned a little French in return. She even taught a class on American holidays.

“They had no idea of the concept of Halloween,” she said.

The U.S. cadets also trained with their Malagasy counterparts, running through the city every morning as a group. The Malagasy cadets would sing as they ran.

“They were singing their hearts out,” said White. “It was just very beautiful. Their songs have stories and meanings. That was one of the most eye-opening things for me.”

One day the cadets hiked 12 miles up to a secluded village in the mountains. The villagers taught them how to weave baskets and carve wood. The visit culminated with a bonfire, s’mores, dancing and music from speakers powered by solar panels.

Despite the poverty, she said, the people of Madagascar appeared to be genuinely happy and would willingly share what little that they had. But White also returned with an appreciation for everything she has in the United States, including clean water and public education.

She is scheduled to graduate in December with a bachelor’s degree. She intends to serve at least four years of active duty in the Army and is hoping to be assigned to the Medical Services branch.

White’s childhood dream of becoming a doctor is still very much alive.