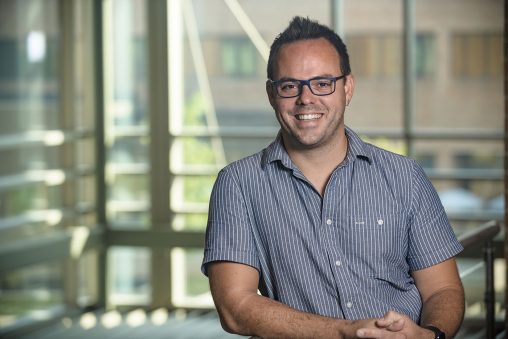 When he was a student at Wright State University 12 years ago, David Hardman started a conversation club of students and faculty that would meet weekly at a coffee shop in Oakwood to speak French.

More than a decade later, the club still meets, but Hardman isn’t there. That’s because he’s in France teaching at three universities, recently became a French citizen and is planning to settle in his adopted country.

“I’ve always wanted to live in another country,” said Hardman. “But I’ve always thought I would want to come back to Wright State and teach French. Maybe one day I’ll come back and do that.”

Hardman grew up in Dayton. His father taught elementary school for 40 years, and his mother is a retired pharmacist.

As a teenager, Hardman was no stranger to foreign countries. When he was 14, he took a month-long family vacation to Hong Kong, Beijing and Bangkok. During high school, he took several mission trips with a church group to Brazil and Paraguay, where the group built houses for the needy.

Hardman also started taking French in high school. After graduating from Northmont High in 2000, he attended Anderson University, a private Christian school in Anderson, Indiana. He went to France for the first time in 2001 as part of an exchange program at Anderson, staying in Nantes with a host family for a month.

Hardman then took a break from college and for five years sold furniture for Elder-Beerman Furniture in Dayton. He then enrolled at Sinclair Community College and in 2007 transferred to Wright State and majored in French.

Some of the classwork was book-based but most of it involved actively participating in class.

“We did plays. We watched certain films,” Hardman said. “We did lots of poetry. We created our own films.”

Both Halling and Abadie pushed Hardman to study abroad. So in 2008-09, he began studying at CIDEF, a French language program at The Catholic University of the West in Angers.

“The city is just magical,” he said. “It is the perfect city for studying abroad. There are five universities.”

Hardman lived with a host family and immersed himself in French. He would walk from the house to the university and back every day, a trip that took a total of 90 minutes. He would listen to French on his phone the entire way.

“It’s very difficult to learn a new language unless you are immersed in the culture. That’s the best way to learn,” he said. “Wright State gave me that opportunity.”

Immersing oneself in the culture was not all hard work. Hardman took advantage of the city’s free art and other festivals, including theater and dance performances on the town squares.

“There is always something going on,” he said. “For the festivals, if you can imagine a 1920s French circus or a steampunk style, which incorporates technology and aesthetic designs inspired by industrial-age steam-powered machinery; that’s what it’s actually like.”

After returning to Wright State and graduating in 2009 with a bachelor’s degree in French, Hardman returned to France, where for the next two years he worked as a teaching assistant through the TAPIF program at a high school teaching English. Then he enrolled at the University of Angers to work on his master’s degree while teaching English there as a lecture.

Currently, Hardman teaches English full-time at The Catholic University of the West and as an adjunct professor at a fine arts school and the University of Angers. In addition, Hardman has dual U.S.-French citizenship and bought a house in France.

He often meets with Wright State students in the summers when they come to Paris as a group.

Halling says she is super impressed with all Hardman has accomplished and that he is well prepared for more success in France.

“In high school, people told him he was no good at languages, but he took French in college, fell in love with the language and the culture, and proved he could learn to speak a language enough to fully integrate,” she said.

Hardman advises students interested in making French their career to immerse themselves in the language.

“Make sure you are listening to French every day,“ he said. “There is a lot of French TV you can watch online. But studying abroad is what changed me. It really helped my French.”