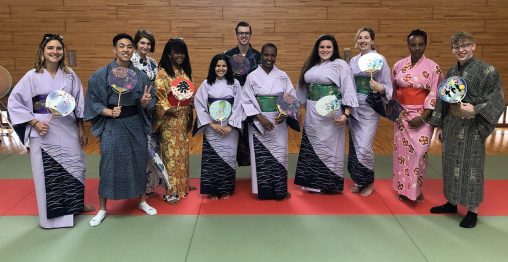 There were visits to shrines, government offices, retail stores and Hiroshima, the city leveled by an atomic bomb during World War II. But staying at the homes of Japanese families may have been the highlight of a study abroad trip to Japan in July for 10 Wright State University students.

Each student stayed with two Japanese families in Okayama or Kurashiki and in Akiota.

“The students were integrated into whatever the Japanese family was doing,” said Wakiuru Wamwara, associate professor of marketing who led the trip. “One of the goals of the trip was to learn about Japanese culture and business. It was a really good experience.”

The trip was part of Wright State’s Japan Ambassador Program. It is connected to the Kake Institute and based primarily in Okayama, a city in western Japan known for its 16th century castle, 15th century shrine and iconic formal garden.

From July 1-15, the students visited Okayama, Akiota, Choshi City, Hiroshima and Tokyo. They met with government leaders, including a governor and mayors.

“Being able to meet the mayor and shake hands with the governor was an honorable experience worth noting and very much appreciated, especially the little gifts that they gave us all,” said student Jasmine Warren.

The students visited temples and shrines as well as college campuses, a museum, a park and a hot spring.

“At one of the temples they encouraged us to cultivate thyself and Japan’s beautiful countryside of Akiota,” said MBA student Michelle Gigante. “Endless green mountaintops cast with streaks of fog made it easy.”

Additionally, students participated in festivals and visited several campuses in Okayama and Chiba, where they attended lectures and a fine arts workshop. Kara Thornbury, a fine arts major, was able to get a private lesson in making bizen ware, a traditional Japanese pottery.

“Getting to practice one of the mediums I love in a country I was dying to see was fantastic,” she said. 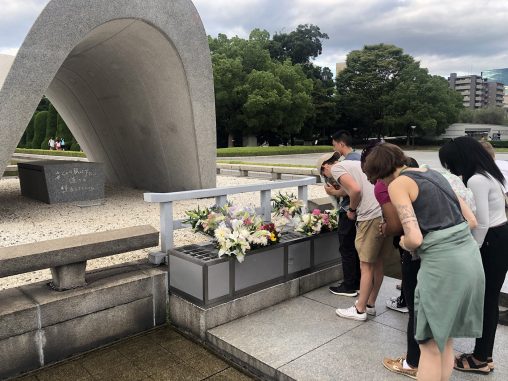 The students laid a wreath at the Hiroshima Peace Park.

“The Japanese are very big on packaging,” said Wamwara. “They use a lot of plastics. You go into a grocery store, and a banana is in a package. The candy is beautifully packaged.”

“At stores that accept credit cards, they will accept your card with both hands and treat it very carefully,” he said.

In Choshi, the students donned yukatas, traditional Japanese summer kimonos that are worn at outdoor summer events such as hanabi, or fireworks displays.

“It’s best if you experience the world for yourself,” said student Alliah Turner. “You can learn so much from other people.”

The students also went to the Miyajima Shinto Shrine, a UNESCO heritage site on the island of Itsukushima best known for its “floating” torii gate.

“I learned about Japanese history by participating in their practices at the shrines and was taught about the effects of war at the Hiroshima museum,” said Thornbury.

In Hiroshima, the students met with a survivor of the atomic bombing of the city in 1945 during World War II and laid a wreath at Hiroshima Peace Park.

“It was very, very moving and very impactful,” said Wamwara.

Thornbury said the whole visit enabled her to meet her academic and personal goals.

“On this trip I created memories that I didn’t think I would ever have,” she said. “But this program made it possible for me to have to the life-changing experience I needed.”

In September, Wright State hosted Japanese students as part of the same exchange. On Sept. 11, the students along with President Cheryl B. Schrader planted a cherry blossom tree near the university’s Garden for the Senses to symbolize the success of the program.

The University Center for International Education will host the Education Abroad Fair on Wednesday, Sept. 25, in the Student Union Atrium from 11 a.m. to 1:30 p.m. For more information visit wright.edu/events/education-abroad-fair-1.