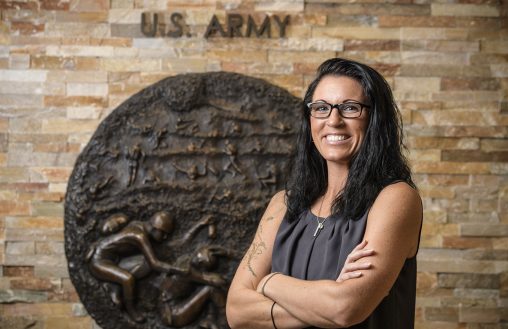 Loghan Young, a Master of Public Administration student, helps fellow veterans succeed as a graduate assistant in the Veteran and Military Center.

Leading truck convoys in Afghanistan that survived suicide car bombings and firefights should be on Loghan Young’s resume. But it’s probably not.

The Army veteran and Wright State University master’s degree student talks about it matter of factly and only when asked. But her yearlong deployment in war-torn Afghanistan, where she drove through the narrow, dangerous streets of Kabul, was a crucible for Young that steeled her for the future.

“It gave me the courage and strength to conquer anything,” she said.

Young has since traded the battleground for a college campus and is pursuing her master’s degree in public administration. She also works as a graduate assistant in Wright State’s Veteran and Military Center, where she helps veterans achieve success in the classroom.

It’s all a far cry for a girl who grew up on Barbie dolls.

“I loved Barbies,” said Young, who grew up mostly in Dayton with a four-year interruption in Kissimmee, Florida. “If we went on a family camping trip, my Barbies replicated it. They lived the story.”

But Young was also a bit adventurous. Fishing, slip-sliding in mud and riding four-wheelers and dirt bikes were part of her childhood. She once had a close call with alligators after falling off of a knee board in a Florida lake near the animals’ nest.

Young’s journey to Wright State was a twisting, winding road.

After graduating from Fairborn High School in 2006, she worked various jobs while trying to support her young son.

“I was at rock bottom,” she recalled.

A friend of hers was an airborne and Military Police officer in the Army stationed at Fort Bragg, North Carolina, and one day she went to visit him there. She was impressed with the Army life and the level of respect the soldiers were given.

“The military just became a fantasy to me,” she said. “It was this respectable lifestyle, family, camaraderie. Everything about it was very attractive.”

Young also saw the military as a way to get housing and an education. So in 2009, she joined the Army.

At the recruiting station, she met a recruit who agreed to help her train for the running she would need to do at basic training. (Four months later, the couple was married and recently celebrated their 10th wedding anniversary.)

Young said basic training at Fort Jackson, South Carolina, was the best time of her life.

“It was stressful in the moment, but I made the best friends I’ll ever meet,” she said. “I still talk to them to this day.”

After completing basic training in 2010, she went to Fort Leonard Wood, Missouri, where she trained to be a truck driver. Then she was assigned to Fort Sill, Oklahoma.

On July 4, she deployed to Afghanistan, where she would become the lead convoy driver and part of the personnel security team. The convoys would deliver supplies and ferry high-ranking military officers to meetings in Kabul. The mostly unpaved streets and paths teemed with pedestrians, carts, bicycles, motorbikes and Toyota Corollas.

“You would see 2-year-olds roaming the streets by themselves,” she recalled. “It was surreal. It was an extreme culture shock.”

Young’s convoy group was called the Spartans and featured the ancient Greek warriors spray-painted on the trucks. A general told her that a review of intelligence reports revealed that the convoy had a reputation and that the enemy Taliban fighters were told by their leaders to stay away from the Spartans because of their diligence.

“I’ll never forget leaving the camp gate for the first time,” she said. “I remember thinking, ‘This is it. I’ve got to stay focused. Don’t get complacent. Scan everything.’”

Although not a single member of the convoy was killed during the year’s deployment, the group twice came under attack, once from a terrorist car bombing directed at another convoy near the gate of Camp Dubbs. A second time Young’s convoy came under fire just outside the gate of Camp Phoenix and barely escaped harm from detonations by two suicide bombers. The convoy barricaded the gate to protect the camp during a 15-minute firefight. Young was awarded a Combat Action Badge.

Young returned from Afghanistan on July 4, 2011, and left the Army at the end of 2012. She completed cosmetology school in Oklahoma and in 2014 moved back to Ohio.

She became a first-generation college student, earning her associate degrees in psychology and liberal arts and a certificate in human resources from Sinclair Community College in 2016.

She then chose to transfer to Wright State and in 2018 graduated with a bachelor’s degree in organizational leadership and a minor in veterans services.

“Growing up in Dayton, Wright State was THE college of Dayton,” she said. “It’s affordable, it’s convenient, it’s local, it’s right in the middle of everything. It’s extremely appealing in that sense. It was a no-brainer.”

The Veteran and Military Center affirmed Young’s decision to attend Wright State and within a few months she had a job there as a front desk peer adviser.

Today, the 31-year-old Young flashes a blinding smile framed by a sleek black mane. A tattoo on her upper arm is that of a vine that entwines a mother kissing a baby and the names of her three children.

She works at the VMC as a graduate assistant, focusing on what veterans need to succeed in school. She teaches workshops on how to study, conduct research, write papers and get involved in campus activities. One workshop focuses on the area’s “hidden gems,” the best places to eat, get coffee, study privately.

Young also has been aggressively pursuing and saying “yes” to opportunities even though it might take her out of her comfort zone.

She was on a panel at Antioch University directed at transfer students and a mental health panel at the Dayton Veterans Administration Hospital. She also spoke at a national military symposium in Las Vegas attended by representatives of 300 colleges around the country.

Young was bombarded by questions about the success of the VMC.

“Everyone wanted to know how Wright State does it with their military students,” she said. “If you are a veteran, there is no better place to be than Wright State. We are close to Wright-Patterson. Faculty get it if students have National Guard responsibility or have to deploy. And the VMC tries really hard to form personal relationships and really mentor students. There is an indescribable support system at the VMC if you are willing to use it.”

Young says her military experience has given her confidence, the ability to multitask and a much greater appreciation of living in the United States.

After graduation, she wants to continue working with military veterans and help them transition from the military into civilian life.