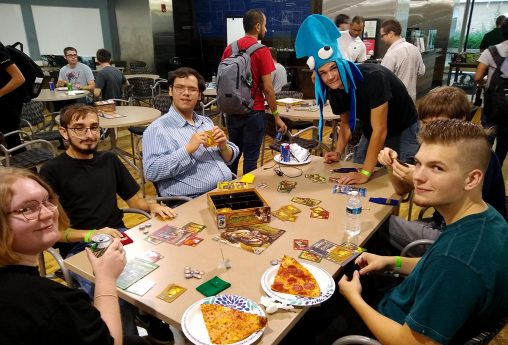 More than 200 students and others attended the annual event at the start of the fall semester.

The library was divided into a Tabletop Zone, Console Zone, eSports Zone and Escape Zone. Three student organizations — The Adventurer’s Guild, The Tabletop Club and the Collegiate eSports Club — helped monitor the gaming areas along with volunteers.

Games and activities included “Mario Kart,” “Smash Bros,” “Rock Band,” “Just Dance,” “Trivia Party” and two library-themed escape rooms. About 70 attendees attempted one of the escape rooms, with groups solving the clues that led to their escape in 10 to 30 minutes.

Attendees devoured more than 60 pizzas from Cousin Vinny’s as well as chips, cookies and sodas.

“I was thrilled so many students stopped by the library with all the events going on that first Friday,” said Matt Shreffler, head of Resource Delivery Services for Library Public Services. “They got to see our updated study rooms, our new carpet and furniture, and hopefully they got a sense that the library is a welcoming place where they can study or relax any day of the week.”

Funding, equipment and volunteers for the event were supplied by Computing and Telecommunications Services, Friends of the Libraries, Residence Life and Housing, Student Affairs, Student Involvement and Leadership, University Center for International Education and University Libraries.