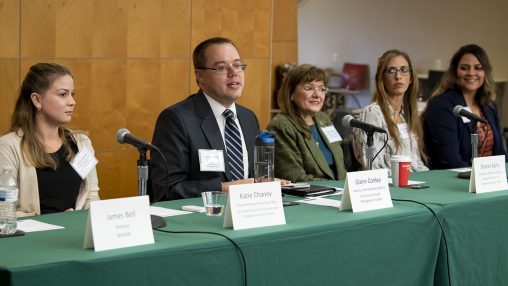 College of Liberal Arts alumni reflected on working at Wright-Patterson Air Force Base during a Career Services event.

Students got a peek at some of the many jobs available at Wright-Patterson Air Force Base and how to get them from a panel of base workers, all alumni from the Wright State University College of Liberal Arts.

The Wright-Patterson Air Force Base Careers Event on Oct. 23 drew a large crowd of students and faculty members to the Atrium of Millett Hall.

“What was really special about this event is that it highlighted alumni at Wright-Patterson from the College of Liberal Arts,” said organizer Wayne Stark, director of workforce development for the Center for Liberal Arts Student Success (CLASS) and career consultant with Wright State Career Services.

“Oftentimes, people think Wright-Patterson is just about technical, computer, STEM and logistics careers, and certainly those are a large and critical part of base operations,” said Stark. “But liberal arts students, with their myriad of critical workforce skills, have been very successful and have thrived at the base as well; sometimes within those areas and in many other sectors as well.”

The nine panelists work everywhere from the Air Force Research Laboratory to the National Air and Space Intelligence Center. They have degrees in international studies, history, economics, urban affairs, political science and international and comparative politics.

The panelists said there is a great diversity of jobs at the base for all majors.

About half of the 30,000 workers at Wright-Patterson are approaching retirement, and filling the jobs that will be left open is critical, according to a recent story in the Dayton Daily News.

The panelists said there is a good mix of active-duty military, civilian workers and defense contractors at the base, that they have a strong sense of mission and that many will put in extra time just to get the job done. Some jobs offer international travel opportunities.

The students were told to be open to changing their career course if they work at the base, go where the opportunities are, be willing to start at the bottom and consider working for defense contractors to get their foot in the door. 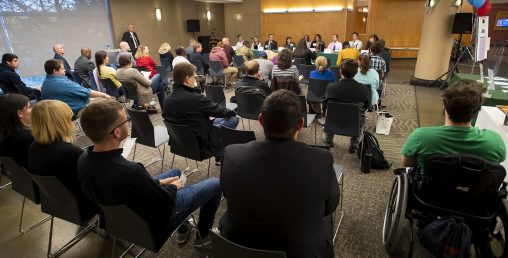 The Wright-Patterson Air Force Base Careers Event was part of an on-going series offered by the Center for Liberal Arts Student Success.

The panelists told the students that learning how to write and communicate well is important and encouraged them to take advantage of internships while they are in college and to use Career Services.

The students were also told to try to make their résumés stand out and to rewrite and tailor them for every job they seek.

The event was part of an on-going effort by CLASS to offer targeted resources and networking opportunities for students through a series of field- and major-specific career events.

“For me, this is about helping our students succeed,” said Stark. “With a liberal arts degree there are a myriad of opportunities at Wright-Patterson.”