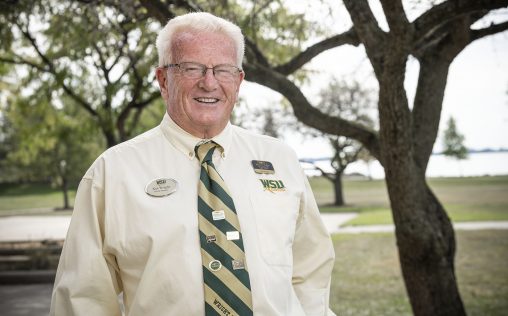 Kip Wright watched the Wright State University Lake Campus be born in 1969. Since then he has earned two degrees there, was commander and now an instructor at its Police Academy and is currently the campus’ conduct officer.

And if there is a person who has been more active in the Lake Campus Alumni Network over the past 25 years than the 69-year-old Wright, one would be hard-pressed to name them.

Wright grew up in Mercer County. His mother was a registered nurse and his father worked for the Celina Street Department and what is now the Ohio Department of Transportation.

After graduating from Celina High School in 1968, Wright began taking classes at the Western Ohio College in Celina.

The college was originally affiliated with Ohio Northern University. But about that time, school officials began thinking about becoming part of this “upstart” university in Dayton called Wright State, Wright recalled.

“The rest is history. Here we are today,” he said.

Wright began his career in law enforcement in 1971 as a 20-year-old dispatcher and jailer for the Mercer County Sheriff’s Office. He climbed the ranks, becoming a deputy sheriff, a sergeant, a lieutenant and a detective.

Then he became a probation officer for Judge Dean James of the Mercer County Common Pleas Court while maintaining his reserve status with the sheriff’s office.

Wright earned his associate degree in 1990 and his bachelor’s degree in 2001 at Lake Campus, both in organizational leadership.

“I’m a nontraditional student. It took me 38 years to get my degree,” he quipped.

Wright says many of his retired friends in the community tell him they would have never gone to college if not for the Lake Campus.

“A lot of people in this area years ago did not go to college,” he said. “It was not only too expensive, but people were needed to work on the farms and carry on the family businesses.”

Over the years, the Lake Campus has experienced surging enrollments, a dramatic growth of bachelor degree programs, construction of residence halls and the purchase of nearly 40 acres for expansion.

Most recently it has opened the new Agriculture and Water Quality Education Center and an extension to Andrews Hall that features a new library, a simulation center for nursing students, a science education classroom and a science research lab. 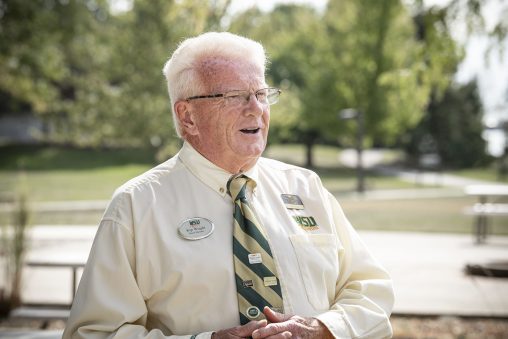 Kip Wright was honored for his commitment to the university with the Wright State Alumni Association’s 2019 Distinguished Alumni Award.

Wright is proud of all the growth.

“We now offer 12 bachelor’s degrees,” he said. “A lot of nontraditional students are coming out and getting their degrees.”

About 15 years ago, Wright helped found and became commander of the fledging Lake Campus Police Academy. He is currently an instructor there.

He also serves as conduct officer at Lake Campus, where he helps students cope with personal situations before they become problems, steering them to mental health counseling and other services.

Wright’s service to his community has gone well beyond his job titles at Wright State.

He established the Lake Campus Community Garden along with fellow instructor Ron Kremer. The garden has donated thousands of pounds of produce to local food pantries.

And for more than 30 years, Wright has been a volunteer tour guide for the Mercer County Courthouse, a marbled, Greek-styled structure with 40-foot-tall Corinthian columns and stained-glass dome. The courthouse celebrates its 100th anniversary in 2023.

Wright has served as the president of the Lake Campus Alumni Network since its inception. In October, he received the 2019 Distinguished Alumni Award from the Wright State Alumni Association.

Wright’s love affair with the Lake Campus is plain to see.

During an open house on Lake Campus on Oct. 10, he competed in a campus contest to see who could wear the most Wright State swag.

Clinging to his shirt and green-and-gold tie were Wright State badges identifying him as a staffer and recognizing his stints as an officer and member of the Wright State Alumni Association. Seven badges in all.