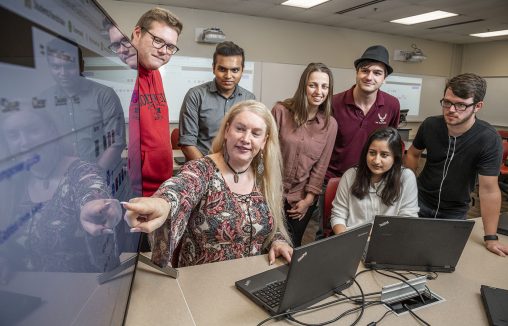 Nella Ludlow was invited to return to Wright State, where she received a master’s in computer science, to teach a quantum computing course in the College of Engineering and Computer Science. (Photo by Erin Pence)

A class in quantum computing — lightning-fast data processing with applications in defense, transportation and medicine — is being taught at Wright State University.

Wright State is one of only a handful of universities to teach quantum computing, which has become a high-demand, rapidly growing discipline overnight.

“It’s exploding right now,” said Nella Ludlow, a visiting professor from Washington State University who is teaching the course in the College of Engineering and Computer Science. “Wright State is one of the few in the country to do this. We’re right at that moment where it’s just starting to take off.”

Computer engineering student Alex Groeger said he had been interested in quantum computing for some time.

“All of a sudden this course popped up and I was really excited,” he said. “So I signed up immediately.”

“You can have many states expressed at any given time, which is exponentially more useful than standard classical computing,” he said.

“You can do amazing stuff,” she said.

Using traditional computers to determine the combination of a lock, for example, can take a long time. Different combinations are tried one at a time until the right one is found.

“What we’re doing with quantum computing is trying all the combinations to the lock at the same time,” said Ludlow. “It’s going to break encryption as we know it.”

Uber used a quantum computer when the company had to route 500 vehicles to 500 destinations.

“Mathematically, that’s a super hard problem. There is no computer in the world that can solve it and determine the most optimal route,” said Ludlow. “But with quantum computers they can.”

Quantum computing can also be used by the military to route supplies and equipment to war zones. It can lead to the development of new medicines by analyzing different chemical combinations.

Three years ago, Ludlow came to Wright State to teach a Ph.D. seminar class on brain-computer interfaces. The 1988 Wright State grad was invited to return to her alma mater to teach the quantum computing class by Mateen Rizki, chair of the Department of Computer Science and Engineering.

Ludlow said she was thrilled to receive support from both Microsoft and IBM. Microsoft shared teaching materials from a course it taught a few months ago in Seattle, enabling the students to have free access to the company’s new quantum programming language, called Q#.

On Oct. 24, the journal Nature published an article describing how Google used a quantum computer similar in size to the IBM quantum computer to solve a problem in 200 seconds that the world’s largest supercomputer at Oak Ridge National Laboratory would have needed 10,000 years to solve. MIT’s Patrick Oliver described the new event, breaking what is described as “quantum supremacy,” as monumental as when the Wright brothers made their first flight.

“They are getting a closer connection; I can see it in their faces. They are excited to do the real thing,” said Ludlow. “I have had companies say we will hire your students after one class.”

Ludlow grew up on Whidbey Island, northwest of Seattle. After graduating high school, Ludlow joined the U.S. Air Force and went to fighter pilot training with assignments in Arizona, Texas and finally at Wright-Patterson Air Force Base in Dayton, where she worked at what is now the National Air and Space Intelligence Center (NASIC).

Ludlow earned bachelor’s degrees in math and physics from Washington State and in 1988 her master’s degree in computer science at Wright State. Then she received an Air Force scholarship and went to the University of Edinburgh in Scotland, where she earned her Ph.D. in artificial intelligence.

After doing postdoctoral work at Cambridge University in England, Ludlow went to Rome Laboratory in New York state and became technical director of artificial intelligence for the entire Air Force.

In 1998, she took early retirement from the Air Force after 16 years and went into private industry. Over the following years she worked for several tech companies, including a Microsoft-funded startup where she wrote computer software for wireless devices. She later became CEO of a company that produced technology to read ID cards. When the company went public in 2008, Ludlow rang the opening bell at the New York Stock Exchange.

In 2015, Ludlow joined the faculty at Washington State University, where she is now a clinical professor and director of the Data Analytics Program.

“The biggest part of it is workforce development,” said Ludlow. “So universities should be teaching this. Companies need a quantum workforce, but there aren’t graduates who have had the courses. So it’s really cool that we’re doing it here. It puts Wright State University ahead of a lot of other places.”