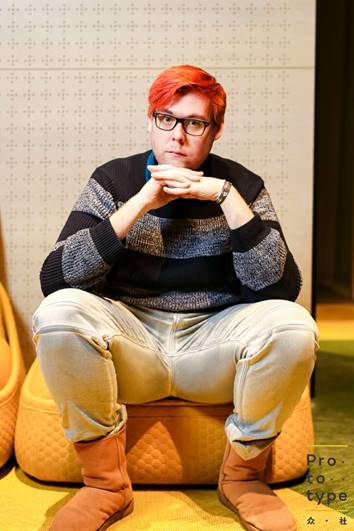 When Wright State University theatre alumnus Sean Jeffries takes his show on the road, he does it in a big way.

Jeffries spent two years in China teaching theatre to elementary and high school students after graduating from Wright State in 2017. He served as a drama teacher with Enreach Education in Ningbo, a major port and industrial hub south of Shanghai.

“I initially applied and thought that I would never hear back from them,” he recalled. “I thought, ‘This is China. Why would they possibly want a simple Ohio country boy like myself?’”

However, Jeffries heard back in a week and after a brief Skype interview was offered the job.

“I was initially hesitant about the idea of living and working abroad,” he said. “However, after talking it through with my parents, we decided that it was a one-in-a-lifetime opportunity that I shouldn’t let pass.”

During his first year in China, Jeffries worked as a drama teacher, teaching acting, theatrical design and theatrical appreciation to students ages 4 to 18.

“With my younger students, I had to work hard to help the students gain the confidence to perform in front of an audience, as most of them had never experienced anything like that before,” he said. “However, once they had gained the confidence, they were very optimistic and hardworking kids.”

Later, Jeffries worked at the Limai Chinese American International High School in Beijing, teaching acting and theatre history, appreciation and design. He also taught a course on the theatrical works of Arthur Miller that culminated in a full-scale student production of Miller’s “The Crucible.”

With his older high school students, he spent a lot of time explaining the practical skills gained from participating in theatre. The students were very focused on attending colleges abroad in America or England and wanted to know how the classes would prepare them for their college experiences.

Jeffries said the biggest challenge for him was overcoming the language barrier.

“Dealing with young students that spoke Mandarin and possessed limited experience with English was quite difficult,” he said. “I had to rely heavily on facial expression and movement to get the younger students to understand the basics of acting.”

During his time in China, Jeffries visited The Great Wall, the Summer Palace and Tiananmen Square in Beijing and other historic sites. He also became involved with the Beijing Playhouse, a theatre organization for English-speakers living in Beijing. He served as the assistant artistic director for the fall 2018 season, which featured “A Gift to Remember” by Joseph Robinette and “Cosi e” by Luigi Pirandello, in which Jeffries also performed.

Jeffries grew up in the rural town of Londonderry near Chillicothe, Ohio. He performed his first show as a sixth grader when he was cast as an ensemble member in a high school production of “The Sound of Music.” During his senior year at Southeastern Local High School in Chillicothe, he played Daddy Warbucks in the school’s production of “Annie” and assistant directed “The Trouble with Summer People.”

After graduating in 2013, Jeffries decided to pursue theatre in college, focusing on theatrical directing and theatrical education.

“I researched a lot of Ohio-area schools and was very impressed by Wright State’s theatre programs and initiatives,” he said.

Jeffries says Wright State provided him with numerous opportunities to experiment, learn and succeed. In addition to being involved with theatre, he was a resident assistant in the Woods and Honors housing communities, an intern in the English and Creative Writing programs and a member of Troupe, an improvisational comedy group.

“Through these experiences I feel that I gained the practical, business and creative skills to achieve,” he said.

At Wright State Jeffries directed seven self-written productions as well as “Steel Magnolias,” “Favors,” “The Complete Works of William Shakespeare Abridged,” “War Brides” and “The Importance of Being Earnest.” He also performed in the ensemble of “Pirates of Penzance” and in two Jubilee Student Directing Lab shows.

W. Stuart McDowell, artistic director of the Department of Theatre, Dance and Motion Pictures, said Jeffries was one of those special students who come to college filled with ideas and passion for life.

“He is a real self-starter, one who has initiative and takes advantage of every opportunity offered to him,” said McDowell. “I’m so happy to see Sean move out successfully into the world because he has so much to offer, as well as a positive worldview that’s infectious.”

Jeffries returned to the United States from China in late July after living and working abroad for two years. He came home to be closer to family and friends and to marry his fiancée, whom he met when he was abroad.