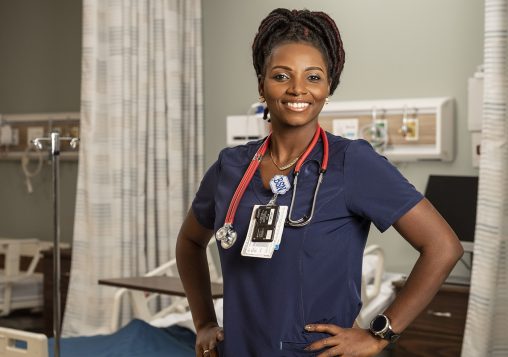 Annette Huelskamp fulfilled a lifelong dream of working as a nurse after she graduated from the nursing program at Wright State Lake Campus. (Photos by Erin Pence)

She traces her desire to become a nurse back to growing up in her native Haiti, where, as a 10-year-old girl, she came to the aid of a bleeding man.

The barefoot man had been wading through a river near Annette Huelskamp’s home and cut his foot. The young girl raced over to the stricken man, tore off a piece of her skirt and tied the fabric over the wound to stop the hemorrhaging.

The grateful man blessed Huelskamp and may have put an angel on her shoulder. A few years later, she narrowly escaped death in a devastating earthquake that shook the Caribbean island nation.

Today, the Wright State University Lake Campus alumna has a nursing degree in her pocket, works in the cardiac unit of a local hospital and aspires to be a traveling nurse to aid the victims of disasters. She’s also an accomplished singer and a bit of a sensation in Haiti.

Huelskamp grew up several hours north of Port-au-Prince, the capital city of Haiti, a historically poor and politically unstable nation. Her father raised crops for the family and her mother sold clothing and other goods.

After graduating from high school in 2008, Huelskamp wanted to pursue medicine or nursing but her parents couldn’t afford to send her to school even though they realized and emphasized the importance of education to their children. So Huelskamp moved to Port-au-Prince to study to become a travel agent.

On Jan. 12, 2010, the catastrophic earthquake struck Haiti, killing more than 100,000 people and destroying or damaging nearly 300,000 homes and buildings. Huelskamp was walking down the street in Port-au-Prince when she heard a loud noise, thinking it might be an airplane crashing. Then the ground began to shake, causing her to veer off of her path.

“A big building right there then collapsed,” she said. “If I would have still been walking the way I was I would be dead. It was terrifying.”

The streets were littered with the dead, leaving Huelskamp with emotional scars.

In October of that year, Huelskamp married her husband, an American missionary whom she had met years earlier in Haiti. The couple settled in the western Ohio village of Maria Stein.

Huelskamp still wanted to be a nurse.

“That dream was silent, but it wasn’t dead,” she said.

So she enrolled at Wright State’s Lake Campus and began taking general classes. After the bachelor’s degree nursing program was launched in 2014 at Lake Campus, she jumped in.

“It was not easy. It is a lot of studying. You have to be devoted,” said Huelskamp, who was also helping raise her two young children. “But here at Wright State we have the best instructors. The professors were ready to help us out. We have the best program.” 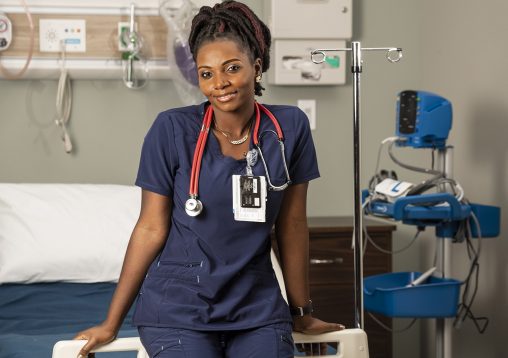 Annette Huelskamp works in a cardiac unit at a hospital in Troy and eventually wants to become a traveling nurse to help the victims of disasters and other emergencies.

Huelskamp found herself being embraced by the campus community. She played on the basketball team and sang in the glee club.

“For me as a foreigner, I came here and had an accent, but that didn’t bother anybody. So I fit right in,” she said. “I am very proud to call myself a Laker. It is like home.”

After graduating with her bachelor’s degree in nursing last May, she landed a job at the Upper Valley Medical Center in Troy. She works in the Cardiac Telemetric Unit, caring for patients with cardiac-related problems.

Huelskamp speaks four languages — English, Spanish, French and Creole. She taught herself English by listening to music, repeating the lyrics of songs. She even sang songs in English for American tourists in Haiti.

Huelskamp recently began writing her own songs and last year released her first song on YouTube. Recorded under the name Shega, the song is titled “Cheri M’ damou.” It is about a woman who defies convention to pursue the man she loves.

“It’s a woman saying to a guy, ‘Hey, I’m in love with you and scared to tell you about it because I don’t want you to break my heart — but I’m going to take the chance,’” she said.

During finals week last spring, Huelskamp wrote songs as a way to take a break from studying. She is working on an album that will be produced by Nickenson Prudhomme at a recording studio in Florida.

“I’m known at home in Haiti. People know my song,” she said. “They call me for interviews a lot.”

Singing aside, Huelskamp’s long-term goal is to earn her master’s degree in nursing and become a traveling nurse, aiding the victims of disasters and other emergencies.

“Since I can speak four different languages I want to travel all over the world to help people out,” she said. “Let’s say something happens in Guatemala; I can speak Spanish.”

She also plans to offer her nursing services to fellow Haitians when she returns to visit.

Huelskamp realizes she is currently living the dream.

“A girl like me came from a poor country, with English not being my first language,” she said. “This is paradise on Earth compared to my home in Haiti, but then to get a nursing degree. Wright State, the Lake Campus — this is the best I could ask for.”