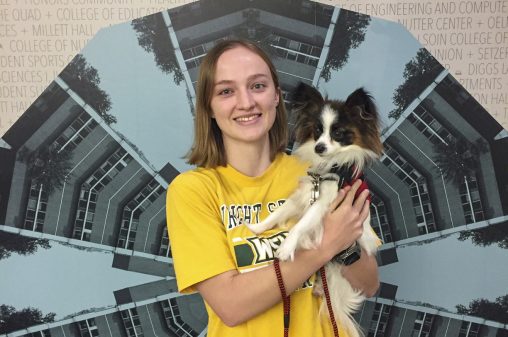 Wright State Career Services and the Alumni Association helped senior Jacquelyn Smith line up a job as a software engineer months before she graduates.

Graduation for Wright State University computer science student Jacquelyn Smith was seven months away and she had no idea where she would go or for whom she’d be working.

Smith has been hired as a software engineer by Altamira Technologies Corp., a software-designing defense contractor headquartered in McLean, Virginia, just outside Washington, D.C.

Smith connected with Altamira at a career fair at the Wright State Nutter Center and later at a networking dinner hosted by Career Services and the Alumni Association.

“I joke that I found my job by accident, but I’m beyond grateful to Career Services for everything they do,” said Smith. “Had they not hosted the events I attended, I may not have found the position I did. Who knew going to one career fair to learn about career paths would change my life?”

Mariann Weiss, career advisor in Career Services, said students can underestimate the power of networking and the role it plays in finding a job.

“Networking is simply relationship building,” said Weiss. “People tend to wait to network until they are looking for a job, but relationships do not happen overnight. Take advantage of any opportunities that get you face-time with an employer, even if it isn’t a company you are considering. You never know who that employer will know and the opportunities it can bring.”

Smith, who grew up in Youngstown, has been extremely active at Wright State. She has served as president of Wright State’s Society of Women Engineers; vice president, president and international project lead for Engineers Without Borders and twice traveled to Uganda, Africa, for a community service project. She has interned with both the Air Force and FBI and also found time to compete in the pole vault and javelin on Wright State’s track and field team.

In May, she will graduate with a bachelor’s degree in computer science, minors in both mathematics and statistics and a certificate in cyber security analytics.

But last October, as graduation approached, Smith had no idea what the future held for her.

“During undergrad, you spend countless time working on projects, hanging out with friends, drowning in academic work, and the future is always a passing thought,” she said. “But no matter how much you try and distract yourself, it’s still coming.”

So Smith decided to attend the career fair at the Nutter Center to learn about companies and explore opportunities. That was her first introduction to Altamira.

Then in December she attended the networking dinner hosted by Career Services and the Alumni Association and met a Wright State student who was interning at Altamira and representing the company.

“I only had him tell me about 10 times to accept Altamira,” Smith recalled.

Each semester, the Alumni Association hosts events to celebrate graduating seniors and help them transition into their lives after Wright State.

“Involving our alumni in this programming — like networking dinners or mentorship programs — benefits both the student and the alumni,” said Emily Bingham, alumni relations specialist in the Office of Alumni Relations. “Of all the opportunities we offer, we find that our alumni are most interested in interacting with current students, especially when it comes to helping them find jobs.”

Smith later did two interviews with Altamira, one with the software team and the other with the research and development team. That was followed by a telephone call from the vice president of Altamira’s software division. He told her to take the weekend and think about what it would take to get her to work for Altamira and he would call her the following week.

He did and sent her an offer that she accepted. After graduation, Smith will begin working for Altamira at the company headquarters in McLean. She will do programming and help with defense contracts that come in.

“Sometimes in life you don’t realize how one small, maybe even seemingly mundane decision can shape your life,” said Smith. “Honestly, I don’t think I would have found Altamira or had the interest that I did had I not been able to interact with them in the ways I did. The people in Career Services really want you to succeed.”