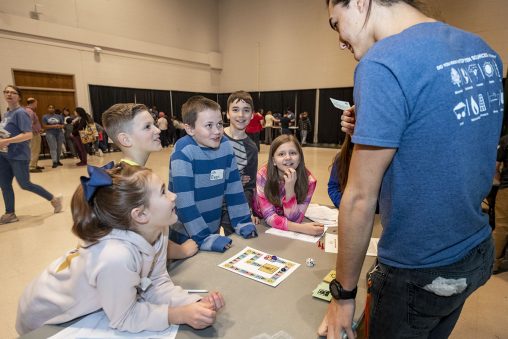 Elementary school students learned about energy conservation and efficiency from high school students well-versed on the topics at the Energy Fair in the Wright State Student Union.

At one station, students made a human electrical circuit by joining hands and using a spoon to illuminate a glass tube. At another, they grabbed a thermal camera to visually detect heat that revealed itself in blossoms of red. Toy bugs and flowers powered by solar energy scurried and swayed at still another station.

It was all part of the third annual Energy Fair at Wright State University facilitated by the Ohio Energy Project and hosted by The Dayton Power and Light Company and Vectren Energy Delivery of Ohio, a CenterPoint Energy Company.

More than 300 students in grades four to six cycled through stations set up in the Student Union Apollo Room on Feb. 25–26 to learn about energy conservation and efficiency from high school students well-versed on the topics.

Nancy Roudebush, a fifth-grade teacher at Ascension School in Dayton, said the energy fair makes what the middle school students have learned in books more meaningful.

“They have the opportunity to be hands-on, be interactive, which is one of the best ways for kids to be able to learn,” she said.

She said many students are becoming more interested in science and are enthusiastic about it.

Amy Elston, an instructor and assistant director of the Office of Partnerships and Field Experiences in the Wright State College of Education and Human Services, was on hand to observe the Energy Fair.

“We value our partnerships with OEP, DP&L and Vectren and are thrilled with the opportunity to have the fair at Wright State,” said Elston. “It brings middle school students and high school students together to learn in such an engaging environment.”

The mission of the nonprofit Ohio Energy Project is to help educate the next generation about energy conservation and efficiency.

DP&L and Vectren have partnered with the Ohio Energy Project to provide a free energy efficiency education program for teachers, students and their families. It is part of DP&L’s energy efficiency efforts for customers, which also include discounts on energy-efficient lighting, free refrigerator recycling, rebates on new heat pumps and air conditioners and rebates for business customers.