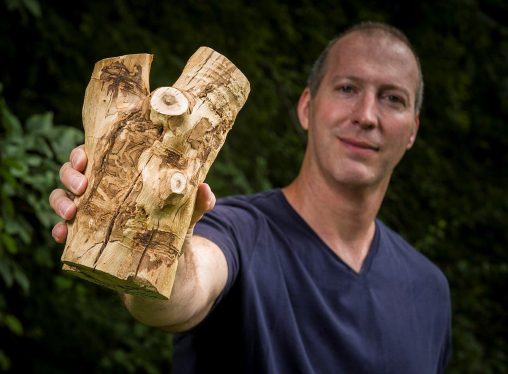 Don Cipollini, professor of biological sciences and director of the Environmental Sciences Ph.D. Program, says COVID-19 is acting like many invasive species, including emerald ash borer.

Cipollini, director of the Environmental Sciences Ph.D. Program, is a leading expert on emerald ash borer, an invasive green beetle that has killed millions of ash trees throughout North America. In 2014, Cipollini announced that the beetle had spread to white fringetree.

Cipollini said the results of the study have many parallels to COVID-19, the virus that has spread into a global pandemic and left thousands dead.

“By examining trees during and after the invasion of the beetle, we saw that mainly older, stressed trees got attacked by the beetles, attack rates declined through time, and previously attacked trees could recover from attack once pressure by the beetle was relieved,” said Cipollini. “It offers a ray of hope.”

Cipollini said COVID-19 is acting like many invasive species, including emerald ash borer.

He said the coronavirus encounters a new habitat of humans lacking resistance, starts to infect people in a largely undetected fashion, spreads exponentially, peaks and then declines.

It took 10 to 15 years to detect the presence of emerald ash borer in southeastern Michigan. Then it roared through the entire eastern half of the country over the next 10 to 15 years.

When Cipollini and his team first looked at the white fringetrees in 2015-2016, most of them had just been through the peak of the invasion wave. Almost 30% showed signs of attack, and the larger and older stressed trees in denser plantings that were near infested ash trees were more likely to be attacked.

“Basically, those trees unable to socially distance themselves from sources of emerald ash borer were more vulnerable,” said Cipollini.

When the researchers looked at the white fringetrees in 2018–2019, the beetle attack rates had fallen significantly — to 13%. Trees previously attacked that were not repeatedly attacked recovered their health. Trees still getting attacked were the larger, stressed trees.

Cipollini said the situation has remained pretty dire for ash tree species that lack resistance to emerald ash borer and are in situations like in the wild where they cannot feasibly be treated.

“White fringetree has a leg up on most ash tree species as it appears to possess some inherent resistance to the borer despite it being an acceptable host,” he said. “Thus its outlook is more positive.”

Cipollini said unfortunately the clock on people’s ages cannot be rewound. But he said people should be encouraged to stay as healthy as possible through diet, exercise and other health-promoting measures in order to reduce their vulnerability to pandemic diseases.

“Our study with emerald ash borer and white fringetree suggests that once we get over the hump with COVID-19, then the collateral damage wrought by the disease will decline, most people will recover, and a substantial portion of the population may not even get it,” said Cipollini. “However, we may have to deal with this virus as a regular component of our seasonal afflictions if it cannot be wiped out.”