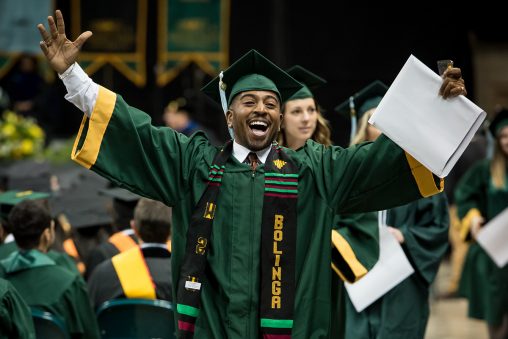 A special graduation-related ceremony in which graduating African and African American Wright State University students are recognized with a Kente Stole is going virtual this year.

“This ceremony has deep cultural significance and is a joyous celebration of the students’ successful completion of their undergraduate degrees,” said Tonya Mathis, interim associate director of the Bolinga Black Cultural Resources Center, which holds the traditional ceremony.

Native to the African nation of Ghana, the Kente Stole was developed in the 17th century by the Ashanti people but has its roots in a long tradition of African weaving, dating back to about 3000 B.C. Often reserved for royalty, the stole is a visual representation of history, philosophy, ethics, oral literature, religious beliefs, social values and political thought.

The Kente Stole ceremony had been scheduled for April 20 but was delayed after Wright State canceled campus events to help prevent the spread of coronavirus (COVID-19).

The students will instead be presented with an electronic version of the stole plus a certificate via email, thanks to help with the design from Brandy Foster, executive director of The ONEIL Center at Wright State University.

Nearly 230 students will receive the individual congratulatory emails, which began going out April 27 and will conclude May 1.