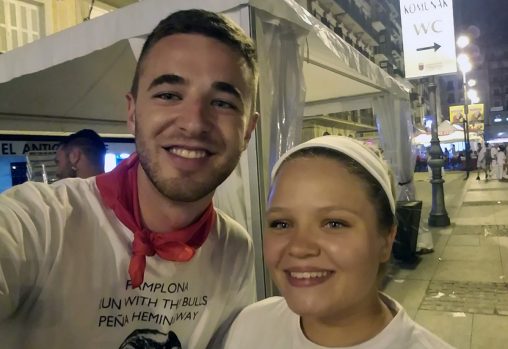 Caitlyn Sandy will earn her bachelor’s degree in nursing on May 2, and Jordan Sandy is expected to complete work for his master’s degree in international and comparative politics later in May.

They walked down the aisle together and now Caitlyn and Jordan Sandy are poised to go full speed ahead together in careers in nursing and military analysis with degrees from Wright State University.

Caitlyn is scheduled to be granted her bachelor’s degree in nursing on May 2, and Jordan is expected to complete work for his master’s degree in international and comparative politics later in May and will receive his degree soon after.

Caitlyn plans to pursue a job in critical care nursing.

“Critical care is my interest because the patients are very sick or very hurt and require a nurse with a great knowledge set and compassion to help them heal,” she said.

Jordan works as an Air Force intelligence analyst for the National Air and Space Intelligence Center at Wright-Patterson Air Force Base. He plans to use his degree to enhance the work he does and potentially for a promotion or leadership opportunity.

Jordan and Caitlyn met while attending Tecumseh High School in New Carlisle, where they were both in Junior Air Force ROTC.

Jordan was a cadet commander and graduated with honors in 2014. He started at Wright State in the nursing program as a direct-admit student, impressed by the College of Nursing and Health and the affordability of the university.

“What kept me there was the dedication by the professors and the personal connections I made with them,” he said.

He took a few semesters off in 2015 when he enlisted in the Air National Guard and needed to go to basic training and technical school. When he returned to Wright State, he changed his major to international studies, graduating with his bachelor’s degree in 2018 and then pursuing his master’s in international and comparative politics.

“What really sold me on the program was the professionalism, dedication and world-class academic experience that the faculty brings to the table,” he said. “I was impressed with my international studies professors as an undergrad, but the international comparative politics staff is remarkably knowledgeable and helpful from the coursework to thesis preparation. This program has been challenging, yet extremely rewarding.”

He said Wright State has been a wonderful experience, exposing him to academic approaches to real-world issues.

“My program helped me put a perspective on political issues and has prepared me to better analyze and interpret current events,” he said.

Laura Luehrmann, director of the Master’s Program in International and Comparative Politics, said Jordan has been laser-focused on his graduate studies. She said it has been especially rewarding for her to see him make connections between his graduate coursework, his thesis research and his career.

“His educational path is evidence for why the options that we present at a comprehensive university are so important — he found his niche by taking a variety of courses and landing in a much-needed and rewarding career, filling a critical need within our intelligence services,” Luehrmann said.

While Jordan and Caitlyn knew each other in high school, they weren’t high school sweethearts. The couple got to better know each other after Jordan graduated in 2014.

He proposed to Caitlyn when he returned from basic training in 2015, and the couple was married on Put-in-Bay in 2018.

Caitlyn decided to pursue nursing because she was interested in the medical field, wanted a career with many different job options, and wanted to help people who were at their most vulnerable.

“It is a great feeling to know you are making a difference in people’s lives when they need help the most,” she said. “I enjoy a challenge and like the critical thinking that comes along with the field as well.”

Caitlyn said Wright State prepared her to be successful.

“The nursing program has been challenging, but I have learned so much along the way,” she said. “The nursing program holds us to a higher standard and ensures we have the knowledge we need to succeed. There is a reason that Wright State has a great reputation among local hospitals and is one of the best nursing schools in the state.”