She has degrees in environmental sciences and sociology, but works as an editor for an automotive magazine and writes about everything from the new Lexus RX to the Jeep Rubicon.

Wright State University alumna Kimiko Kidd is a bit of a Renaissance woman, with interests all over the map.

She is a watercolor painter, a rock collector and a huge fan of the “Mad Max” movies, fantasizing about someday owning a 1974 Ford Falcon XB and a vintage Kawasaki Z1000 motorcycle, both featured in the original “Mad Max” film.

But Kidd’s day job is writing for The News Wheel, an online magazine that features stories for auto enthusiasts and others about new cars, the latest trends in the automotive industry and other related areas. The magazine is part of Naked Lime Marketing, which is owned by Reynolds & Reynolds.

“I like writing and I like mechanical things a lot,” said Kidd. “I’m really good at taking things apart; less great at putting them back together.”

Kidd writes about 30 stories a month and edits 90 to 100 others. She also comes up with many story ideas. Her recent articles include: “2020 Lexus RX Overview;” “Jeep and Bill Murray Shake Things Up with a ‘Groundhog Day’ Super Bowl Ad;” “GMC CarbonPro Truck Bed Stands Up to Hurricane-Force Projectiles;” and “Texas Gives Drivers 3 Ways to Report Credit Card Skimmers.”

“I love the fact that I always get to research stuff,” she said. “And I get to be creative. I get to express myself. I get to put myself into the work.” 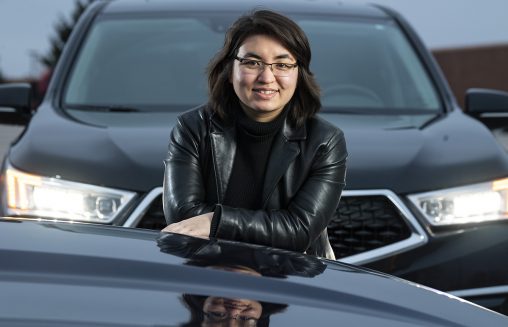 Kimiko Kidd, who graduated from Wright State in 2017 with bachelor’s degrees in environmental sciences and sociology, explores her creative side by writing for The News Wheel. (Video by Kris Sproles/photo by Erin Pence)

Kidd also gets to veer away from always writing strictly automotive stories and go into the environmental realm. She has written about how monarch butterflies are being killed by traffic in Texas during their annual migration and another story about how some states are turning roadkill into compost.

“People who drive electric vehicles and hybrids tend to be pretty interested in how car stuff can intersect with being more green and eco-friendly,” she said.

Kidd grew up in Dayton. Her parents own a graphic design and screen-printing firm that prints T-shirts primarily for the National Museum of the United States Air Force. Kidd was home-schooled.

“It prepared me well for college because I did a lot of self-managing and really understood how to just buckle down and do schoolwork even if there wasn’t a teacher in front of me,” she said.

Kidd loved science as a youngster, influenced in part by the butterfly garden created by her mother, who attended Wright State and spoke glowingly of its biology program.

When Kidd scored the highest grade on her GED among her cohort and as a result received an academic scholarship offer from Wright State, it was a no-brainer for her to become a Raider. She initially majored in biology then changed to environmental sciences.

“That ended up being a great fit,” she said. “Biology focused more on individual organisms, which is great. But I really liked taking an ecological approach, from the top down. The environment has always been a part of what’s been my passion.”

“I decided I wanted to pursue this extra field of study because it complements my desire to go into environmental policy,” she said. “I understood more about systems and organizations, the way people work. I figured I would be better at environmental policy.”

Kidd was able to attend several sociology-related conferences as well as take field trips with her environmental sciences classmates. She felt like she was not just a number at the university.

“One thing I really loved about Wright State is that it’s big but not huge, so I didn’t get lost in a mass of humanity,” she said.

In addition to working at The News Wheel, Kidd wants to perhaps write a book someday.

“I want to continue writing in some form,” she said.