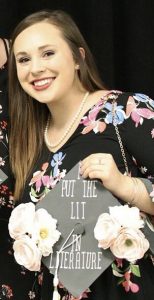 As part of the seventh generation of educators within her family, Ali England had heard plenty about the ills of standardized testing, the lack of respect for teachers, the demanding hours and the tangle of regulations.

“Upon graduating high school there was nothing I wanted to do less than teach,” said the Wright State alumna. “I spent my first year of college trying to convince myself that education was not the profession for me.”

But during her sophomore year at Wright State, England was on the fence about a major and was encouraged by her mother to take an education course.

“Her exact words were, ‘It’s one class. What do you have to lose?’” England recalled.

That class led to a field teaching experience at Trotwood Madison High School in Dayton that changed England’s career trajectory and her life.

“After experiencing that first aha moment with a student, I knew that rewarding feeling was something I didn’t want to let go of,” she said. “I fell in love with education and have never looked back. I knew I had made the right decision for myself.”

England grew up in the southern Ohio village of Peebles in Adams County, graduating from North Adams High School in 2015. She enrolled at Wright State because several of her family members were graduates and she wanted to continue the tradition.

“There is nothing better than being surrounded by the nation’s greatest educators for a few days a year,” she said. “The conversations and ideas I walk away with are valuable lessons that I implement in my own classroom daily. Attending these conferences was the highlight of my college experience.”

Last fall, England along with Angela Johnson, program director of integrated language arts at Wright State, and award-winning authors Cyndy Etler and Chris Crutcher made a presentation at the National Council of Teachers of English’s Assembly on Literature for Adolescents about identity and privilege and using young adult literature to create empathy among students.

“I don’t know if anything will top that,” said England. “It was an incredible experience to present something I am passionate about with a panel of people who are equally as passionate.”

Johnson said England is indeed incredibly passionate about professional opportunities and often travels to other parts of the state to attend author talks and events that promote literacy, such as Project Lit.

“Ali is one of those teachers who loves her content as much as she loves her students,” said Johnson.

England earned her bachelor’s degree in English: language arts education in 2018 and her master’s of education in 2019 and landed her first teaching job within a week of graduation.

Earlier this year, she took on the task of submitting a presentation proposal to the National Council of Teachers of English within seven hours of its due date.

“Creating this proposal was easily the most nerve-wracking thing I’ve done,” she said. “I had convinced myself that I had done a terrible job and put it out of mind as soon as it was submitted.”

Earlier this spring, she received an email from NCTE on her proposal but was in no hurry to check it because she wasn’t expecting it to be accepted. It was.

“I have never felt prouder of myself than when I received that email,” she said. “It was a relief to see all of my hard work finally pay off.”

England said none of what she has accomplished would have been possible without Wright State.

“My small class sizes made me feel like a person and not a number,” she said. “I was able to build powerful relationships with my professors that have carried beyond the university. And I was challenged in my courses and pushed my own thinking beyond what I knew was possible.”

England said she is proud of the successful relationships she has built with her students at McClain High School. Her biggest challenge has been dealing with the coronavirus pandemic that has closed the school for the entire quarter.

“This has forced me to adapt and accommodate for each individual student,” she said. “It has shown me that the social and emotional aspect of education far outweighs the content when dealing with a crisis.”

England’s advice to students studying to be teachers is to realize that a career in education can be challenging and not to be too hard on themselves.

“It is hard work, but it is worth it,” she said. “And don’t be afraid to ask for help. There are so many people that are more than willing to help you through all stages of the profession. Finally, take care of yourself. You can’t pour from a cup that is empty.”