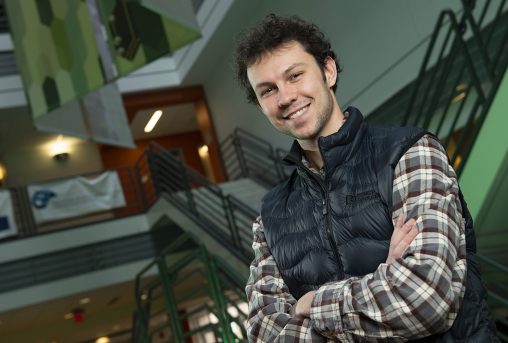 When Wright State University mechanical engineering student Jack Stafford went to work during the fall 2019 semester, just a short distance away was the Nobel Prize Museum.

That’s because Stafford was in Stockholm, Sweden, as part of a three-month internship for Woolpert, an international architecture, engineering, geospatial and strategic consulting firm based in Beavercreek.

“I just started working at Woolpert nine months previously. A few months into that, they asked me to go to Sweden and they paid me for it,” he said. “You cannot get a better opportunity. That’s a great company.”

“The engineers there would design the systems, and I would take their drawings and red lines and put them into the software,” he said.

Then Stafford received the opportunity to work in Sweden for a company closely aligned with Woolpert as part of an engineering exchange. Stafford’s work there was very similar to what he had been doing back home for Woolpert, except the Swedish company used a different computer software system. And Swedish companies design heating and ventilation systems to use water instead of the forced-air systems commonly used in the United States.

“They pretty much use radiators and something called chilled beams,” he said. “So the systems are much different, and they’re also more costly because there is a lot more piping that goes into a system. I worked with my other co-workers there to learn how they do things.”

Stafford said the Swedish internship broadened his perspective on engineering beyond the traditional educational experience.

“Now I have an experience that most people don’t get,” he said. “I’m trained in another system.”

Stafford was also able to soak up the Swedish culture, which “is very cool, to say the least.” He said the Swedes, 90% of whom speak fluent English, are very social and community-minded and that he often socialized with his co-workers afterhours.

Stafford also did a good deal of sightseeing, taking in Stockholm’s architecture and historic buildings.

“My favorite thing to do was to just pick a direction and start walking,” he said. “It’s one of the safest cities in all of Europe.”

One of Stafford’s favorite things to do was to go to Gamla Stan, the city’s old town that is a compact island with cobbled streets and colorful 17th and 18th century buildings. It’s home to the medieval Storkyrkan cathedral and the Royal Palace.

In the heart of Gamla Stan sits the Nobel Prize Museum. Museumgoers can explore the work and the ideas of more than 900 creative minds presented through short films, original artifacts and computers.

“I got to see a lot of artifacts from the people who actually won the Nobel Prizes and learned how penicillin was made, for example,” Stafford said.

Stafford, an Eagle Scout, also did a lot of hiking outside of Stockholm.

“They have a shared-land rule in Sweden, so even if it’s private land you can still be on it,” he said. “It was really interesting to go out and experience that wilderness.”

Stafford builds drones, is a certified drone pilot and has his own drone company. When he was in Stockholm, known as Venice of the North for its canals, he used a drone to get aerial views of the waterways.

Stafford grew up in Centerville. His father works as an engineer at Wright-Patterson Air Force Base, and his mother is an educator.

Stafford was inspired to pursue engineering after taking an environmental science class in high school.

“I was looking into sustainable energy, and I decided to build a hydro-electric generator. I wanted something I could really incorporate in my career as renewable energy, but I also really like tinkering,” he said. “So I thought instead of going into environmental science, maybe I’ll just go into engineering and mesh the two together.”

Stafford and his high school classmates built the generator in a carpentry shop. Using a five-gallon bucket of water, the machinery ended up generating eight to 10 volts of electricity.

“We did a lot of research because we were essentially building an alternator,” he said. “We had to build the coils. We had to spin it and make it essentially a turbine.”

After graduating from Centerville High School in 2017, Stafford came to Wright State because it had an accredited engineering program and was affordable. He decided to major in mechanical engineering.

“I wanted something where I could focus on the tactile aspect of it because I like to build stuff so much,” he said.

Stafford said he is grateful for the strong support for students at Wright State — the accessibility of professors, the Help Center in the College of Engineering and Computer Science and tutoring services in the Student Success Center.

“That really got me through chemistry when I first started out,” he said.

Stafford said he is one of the youngest workers at Woolpert and advises fellow students to pursue jobs and internships there.

“It would be really good for some talent at Wright State to branch out and maybe interview for Woolpert because we need people,” he said. “It’s a good company.”