The words often come to him when he’s grading papers or walking the dog. And he quickly writes them down lest they be forgotten.

It’s a good thing because the words of Bobby Rubin, senior lecturer in the Department of English Language and Literatures, have become lyrics in a best-selling single in the United Kingdom and are used in the production of an album.

“This has been a real creative spark for me,” said Rubin, who is also director of Wright State University’s English as a Second Language Program.

Rubin is not a musician but is a music lover. He is a big fan of the English Beat, a band founded in Birmingham, England, in 1978 that plays a fusion of Latin, pop, soul, reggae and ska.

“One of the things I love about ska is that it’s all about love, unity and racial harmony,” said Rubin.

During one of the English Beat’s concerts in 2018 that Rubin was listening to online, one of the opening acts was the ska band The Skapones.

“I was mesmerized,” Rubin recalled. “I am listening to them and thought ‘You guys are fantastic.’” 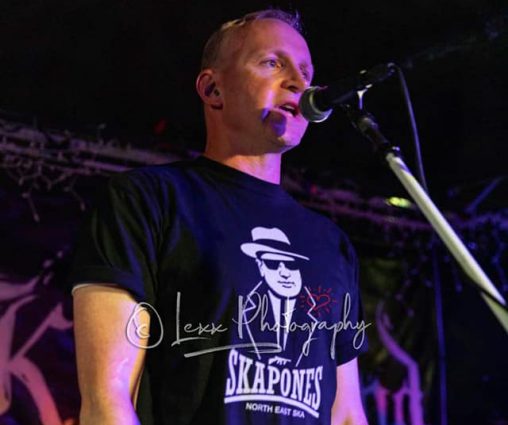 Bobby Rubin, senior lecturer in the Department of English Language and Literatures, performing “Dorian’s Going Grey” with The Skapones during a stop on the band’s U.S. tour in 2019.

He immediately ordered every Skapones CD he could find. And through social media, Rubin became friends with lead guitarist and songwriter Mark Wilson, who asked Rubin for some feedback on a song he was working on from a fan’s point of view.

Rubin sent back a three-page Word document with his ideas for where he thought the song should go, many of which Wilson agreed to incorporate.

So he wrote a few song lyrics and sent them to Wilson, including lyrics for a song called “Dorian’s Going Grey.” The lyrics are a play on words about the Oscar Wilde character and how some older guys still go to concerts and can hold their own on the dance floor.

Wilson loved the lyrics and put them to music. Released in February, the song climbed to No. 6 on the UK Ska Reggae charts.

The Skapones invited Rubin to accompany them on their U.S. tour last August, which included shows in New York City, Baltimore, Chicago and Detroit. When they played “Dorian’s Going Grey,” Rubin came up on stage and sang background vocals.

“It was a dream come true,” said Rubin. “It was an amazing feeling to be up there.” 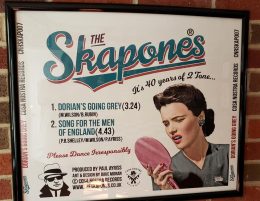 Rubin grew up in Xenia, graduating from Xenia High School in 1987. He earned his bachelor’s degree in Spanish from Indiana State University in 1990 and his master’s degree in English from Wright State in 1993. He joined the faculty as an instructor in the Department of English Language and Literatures.

For the past several years Rubin has taught an Honors class called Literature and Rock’n’Roll, which studies literary influences in rock. He said teaching that course may have helped nurture his interest in songwriting. Next spring, he plans to teach a course that will likely be about the themes of racial harmony in ska and reggae music.