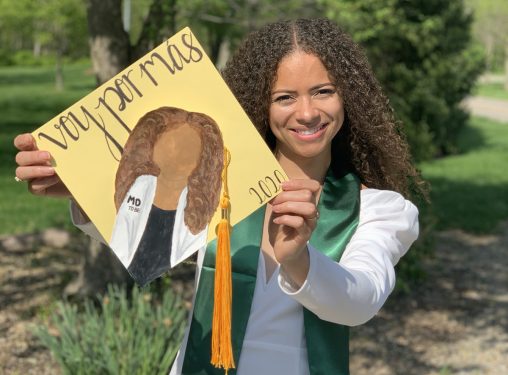 Aubri Pritchett, who graduated from Wright State on May 2 with bachelor’s degrees in biological sciences and Spanish, will begin pursuing a medical degree in the fall.

The empathy shown by a physician when she was a young girl sparked Aubri Pritchett’s interest in medicine. And now the 2020 Wright State University graduate is on her way to a medical career by way of medical school at New York University.

The NYU Grossman School of Medicine is one of the foremost and most selective medical schools in the country. As of 2017, it had an acceptance rate of 1.6%.

Pritchett will begin her studies at NYU this fall. She has always been interested in pediatrics but is keeping an open mind about what kind of medicine she wants to pursue.

“I am very interested in global health and health disparities,” she said. “Upon completion of my studies, I hope I will be able to integrate my love for Spanish cultures with my desire to promote health equity.”

Pritchett grew up in Dayton. Her mother has been a pediatric intensive care nurse at Dayton Children’s Hospital for 28 years. Her father worked at Montgomery County Children’s Services for 30 years before recently retiring.

Pritchett first became exposed to medicine at 11 when she was diagnosed with lupus. She was impressed by the empathy shown by her rheumatologist.

“This situation demonstrated the importance of compassion in medicine and really attracted me to the profession,” she said.

Following graduation from Northmont High School in 2016, Pritchett enrolled at Wright State, despite offers from other colleges, after receiving several scholarships.

Pritchett graduated from Wright State on May 2 with a 4.0 GPA and bachelor’s degrees in biological sciences and Spanish.

During her freshman year at Wright State, she began volunteering at Ruskin Elementary School, where she helped the Spanish-speaking students with their classwork. Additionally, she was a conversation partner for Wright State’s LEAP Intensive English Program.

During her sophomore year, she became involved in Spanish Club and the Multicultural Association for Pre-Health Students. During her final years, she volunteered at a family violence prevention center and Soin Medical Center.

Pritchett said her most meaningful volunteer work included volunteering as a phlebotomist at a local free clinic, working at a clinic while studying abroad in Chile for two months, and volunteering at Flying Horse Farms, a camp for kids with chronic illnesses that she attended as a child. She was also involved in undergraduate research for several years.

Pritchett said Wright State’s financial support enabled her to focus on her studies.

“More specifically, receiving scholarships from the College of Liberal Arts helped me with the costs of applying to medical school,” she said. “Furthermore, my professors’ dedication to my success helped motivate me to achieve great things.”